If you feel the earth's pain before an earthquake or have a panic attack because someone near you is anxious, you might be an empath too. 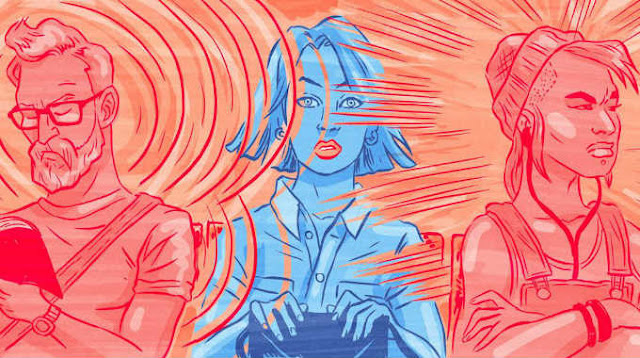 Once you know you're an empath, the women report a sense of relief at having the tools to deal with it. "Growing up as an empath, you can sometimes lack a sense of identity, so as you do meditation and shielding (the bubble exercise, for example, as described by Vix) you start to understand yourself and know what your purpose is," Siobhan explained. "I don't have mood swings anymore. My husband notices it. Now I can read my own emotions and others' separately and literally feel the sadness and irritation come into your aura." Like Vix turning to tarot readings, empaths say they can use their perceived weakness as a strength. "Since I was really little I've been massaging people and my husband has always loved my massages," says Siobhan. "So I looked into learning reiki (energy healing) and the first time I did it it was mindblowing. After that I healed two headaches just by visualising. That was only at the beginning of learning and now I've been doing it a while."

Obviously, this whole concept falls into the realm of new age philosophy. It's not exactly diagnosable by a doctor and if you went to a mental health specialist to tell them you physically feel the world's pain, they'd be concerned. Caroline is aware of this. "There is a lot of people who are in this psychic realm who are just suffering and also sometimes have mental illness," she says. On her website it clearly states that her services are not for those with a mental illness and she isn't a licensed mental health practitioner. Often, she says, this becomes very blurred with what being an empath is.
Caroline was working on a PhD at the time she realised she was an empath and was very concerned about what people would think when she started exploring what this meant. "I was so worried about being branded a crazy. There was a spiritual workshop I attended while still working at my university job. At a certain point, a guy came in with a camera. He was meant to take some photos of our little workshop group for their spiritual centre website. I literally ran off and locked myself into the bathroom, refusing to come out until they promised I wouldn't be in any pictures. I was really worried that exploring energy healing would make me lose credibility at work, so I didn't want anyone to find out about it."
"Ironically, in the end, my academic training really helped me find my way through all kinds of healing modalities. Spiritual communities tend to be on the 'just believe' end of the spectrum. There is often little tolerance for testing a hypothesis or making up your own mind. People are quick to point fingers and say you don't have faith or don't trust enough. I really felt supported by my academic background though in asking tough questions, being critical and trying new things. I tended to be that 'annoying person who always had too many difficult questions'. Without that, I don't think I'd have been able to learn what I needed to learn about being an empath, and how that works."

Just because it exists outside western schools of thought, doesn't necessarily mean it's not true. Some research suggests that one in five people is a Highly Sensitive Person (HSP), a clinically recognised condition. Rather than just being a personality type, like being shy or outgoing, HSPs are defined by their hypersensitive nervous system. Besides easily being overwhelmed by emotional things and having incredible empathy, HSPs also have a heightened sensitivity to physical things like lights, sounds and temperatures. It's widely agreed in the empath community that most empaths are HSPs, but not all HSPs are empaths.
Until then, Caroline advises field tests, if this resonates with you. "Think you're picking something up from someone else? Subtly ask them about it, as in: 'Hey, you're looking a little pale... are you feeling alright?' When you feel something and suspect it's not you, and then someone around you confirms that they are actually feeling that way, that's great validation. It helps you take yourself more seriously. You need to be the one who comes to terms with this being a real thing - or, discover that perhaps it isn't and it's just your own feelings. You have to field test this. Track your intuitive insights: what was your sense about someone, and what happened with that person over time? When you do this, you'll start to see the areas where there is more going on than just you feeling your own feelings. It's hard as a rational western person to open up to this idea and there's often a fear. But you don't need to be scared any more."