All of us feel that we can be so much more as humans. That we are not using our full potential. And maybe we are right…
One of the highest industries in the world are the industries that give us a glimpse of this potential we hold within. 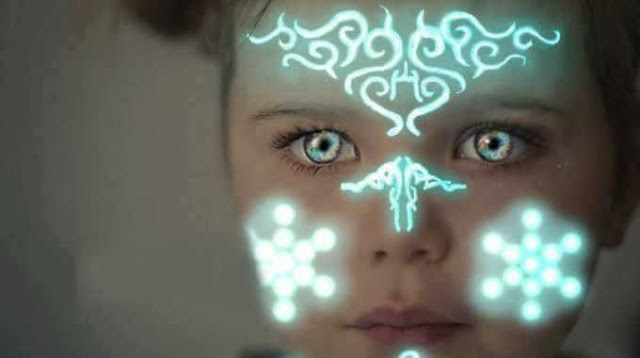 The most watched movies in the world are the movies about superheroes. The most common type of a story told all throughout history is the one about the hero who faces a challenge or an accident, and acquires some form of a superpower as a result of that ordeal. The hero uses this superpower to fight crime, defeat the evil, make things right and protect the world.
It’s like we are subconsciously trying to tell ourselves that we can be this hero, that we have the potential to unlock that superpower within us and ‘defeat the evil’ with it.
But what happens when real people acquire superpowers? 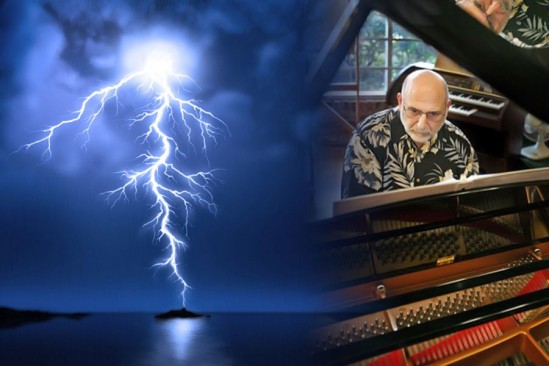 Tony Cicoria was an orthopedic surgeon. One day he was speaking with his mother through a payphone when he was struck by a lightning.
He was technically dead for a while before he was brought back to life. After the accident he had a medical treatment but when he went home he started feeling sluggish and having trouble with his memory. Doctors, however, told him that this was to be expected because of what happened to him.
But as those symptoms dissipated, Tony started feeling a strange urge! Out of the blue he started listening to a piano music. He’d never been interested before but now he was craving for it.
Eventually he bought a piano and, despite not knowing how to play, he was sounding like a master pianist. He says that he just started playing the melodies he was hearing in his head, and what was coming out of him was beautiful!
Doctors are unsure how this happened but Cicoria is really happy. Like he found a purpose!
He named his first piece “The Lightning Sonata” 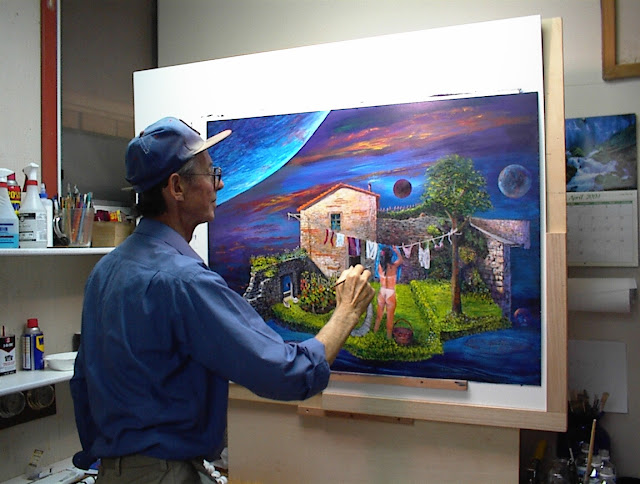 After emigrating from Italy to San Francisco in the 60s Franco Magnani came down with a sickness suffering seizures and often being delirious.
When he began to recover, Franco started recalling vivid details of his childhood home, which he had not seen for more than 30 years.
He became so engulfed by the reoccurring visions that he began to paint the scenes he was seeing in his head.
Back in Italy he was a cook. In the US he was a woodworker. He’d never picked up a paintbrush in his hand before in his life. However, now he was suddenly able to paint in great, almost photo like detail.
Doctors say that the high temperature might have triggered a temporal lobe epilepsy explaining why painting these memories might have become an obsession for him.
However, no one can explain the sudden talent for painting, neither the ability to express the images that he saw in his mind with camera like details. 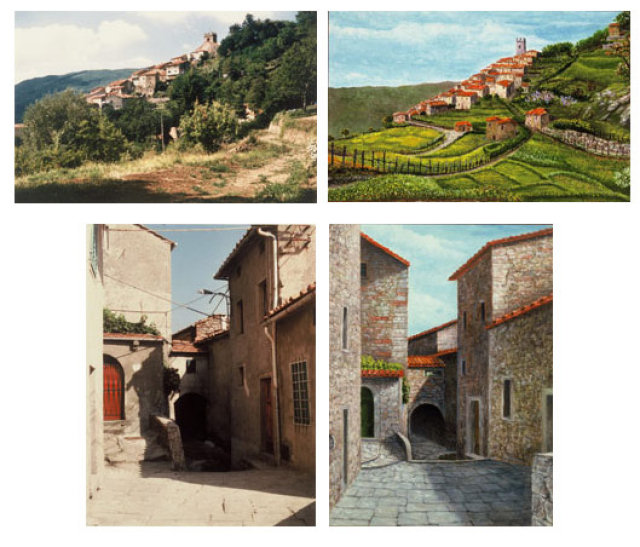 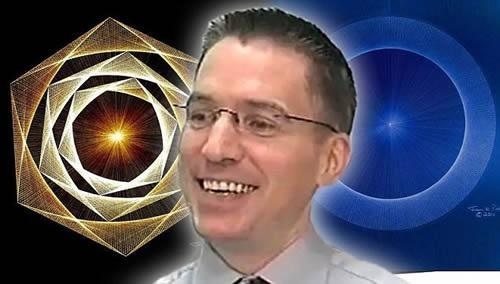 In 2002 Jason Padgett was leaving a bar when he was jumped by 2 guys and suffered a concussion.
After returning home he started noticing geometric shapes everywhere he went.
For 3 years he rarely left his house. Eventually Jason started painting the shapes that he saw. Once he began to venture out more people noticed that his drawings were fractals, mathematical sets that show a repeating pattern.
Jason was never good at math, but now he was excelling! He was also the only person in the world that was able to draw the patterns solely with his hand, without any tools.
The most popular theory is that the blow to his skull affected the areas of the brain that control object boundary formation. This allowed him to see the geometric patterns and perceive the world through a more mathematical prism.
Here are some of his images: 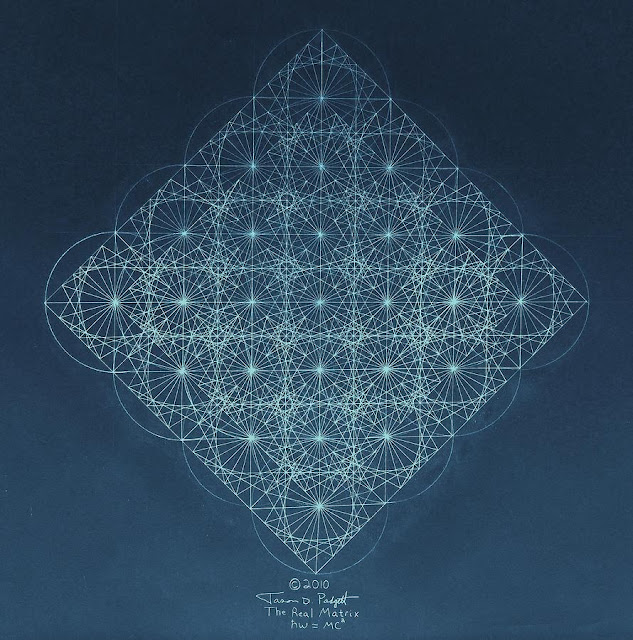 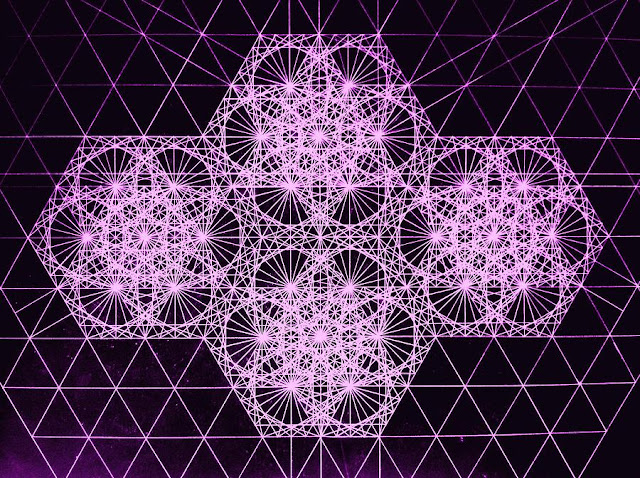 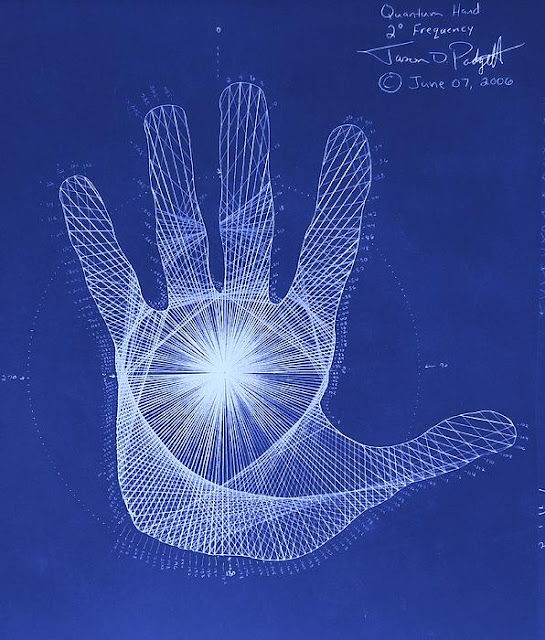 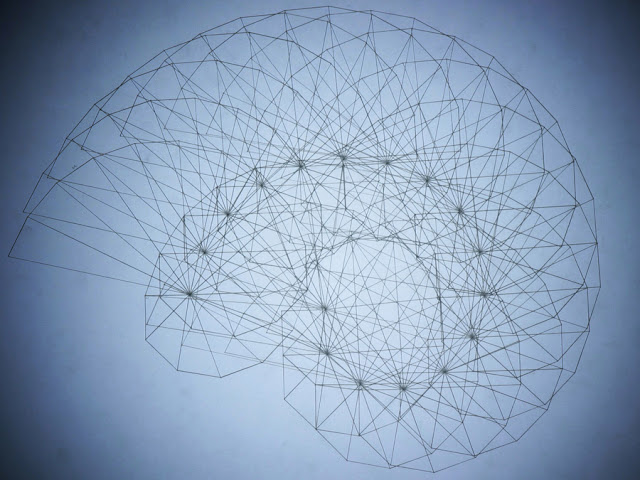 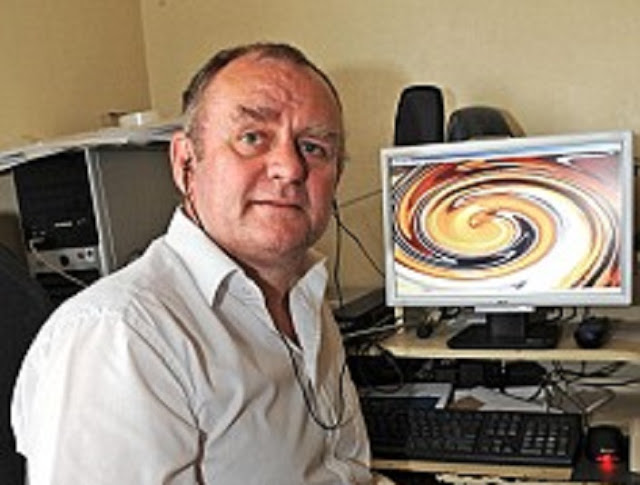 In 1986, Ken Walters was in an accident and broke his back. This made him stay in bad for 1 year. Soon after he was kicked out of his home and suffered 2 heart attacks.
By 2005 he was jobless for almost 20 years. Later in 2005 he had a stroke and while in hospital he tried to write a letter to the nurse. However, he found himself doodling instead of writing. This was strange and new for him.
Ken was an engineer before he was paralyzed and has never been good at art. Doctors said that this new talent was likely a result of the stroke, as the brain can rewire itself to avoid the damaged areas. He was told the symptoms will be temporary.
However, they persisted. His art became more well known and eventually his drawings drew the attention of electronic arts.
He began drawing monsters for their games and he says he wouldn’t change his life for the world.
Here is some of his work: 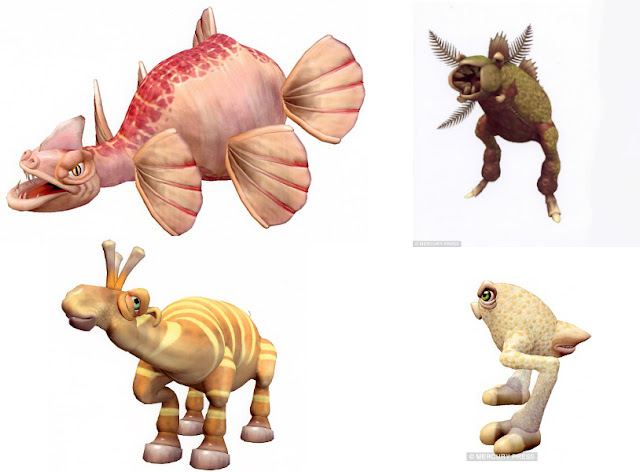 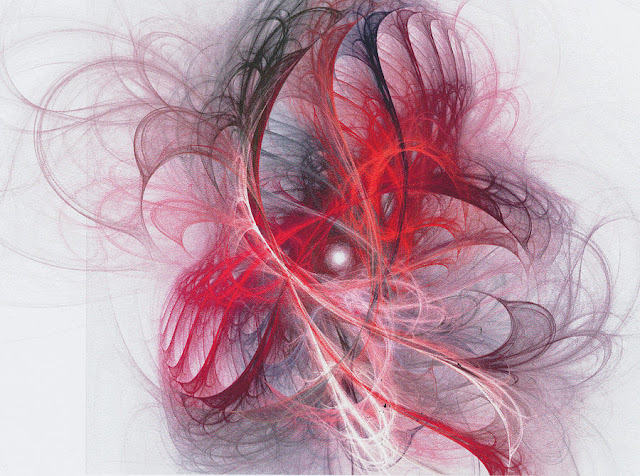 Source: You can get this artwork from here! 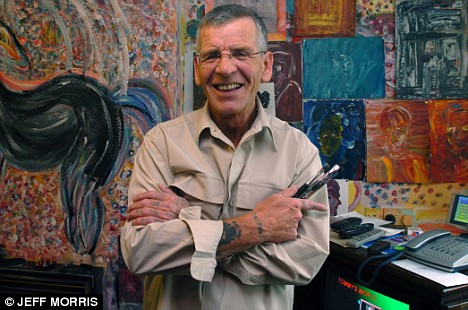 Tommy McHugh was considered to be one of the biggest A-holes in UK. He had a drug problem and a tendency to punch random people that crossed him.
One day he suffered an intense headache and decided to go to the hospital. Doctors told him he had a bleed on both sides of his brain from a ruptured aneurysm and if he didn’t get surgery right away he would die.
Once he was done with the surgery and was able to go home, Tommy realized he was speaking in rhyme. He even started seeing strange images in his mind.
He’d never been creative but these images and rhymes compelled him to write, draw, paint, sculpt and create art. It’s like his aggression was dissolved into art. 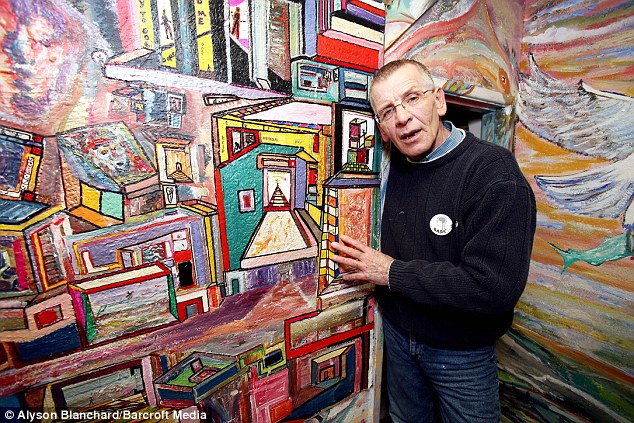 Doctors believe the bleeding caused damage in some areas of his frontal lobe.
The accident left Tommy unusually emotional and unable to hurt anyone, “like Zen monks sweeping steps before they walk,” says Flaherty, a neuroscientist that started working closely with him. “Everything strikes him as beautiful and cosmically meaningful.”
He is obsessed with specific numbers, much like Nikola Tesla was, and strangely enough, with those exact same numbers! He says a tree showed him the numbers 3, 6 and 9!
“I’ll paint three or six or nine pictures at a time. I see those numbers in my head all the time.” Tommy says.
Now his art is shown in many galleries across the UK and he says that, most importantly, he has become a nicer person. 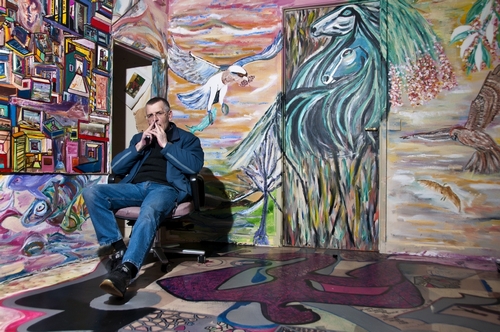 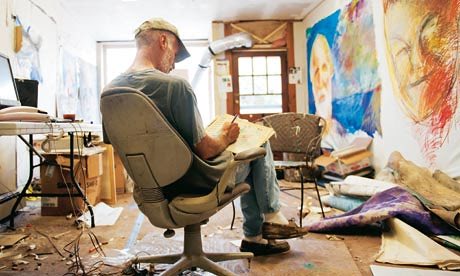 In 1982 Jon Sarkin was a chiropractor. Six years later he developed tunnitus, which causes ringing in the ears, as well as hyperacusis, an over-sensitivity to a certain range of sound.
The only way to alleviate the symptoms was to undergo a surgery but there were complications.
Sarkin suffered a cerebellar hemorrhage and a stroke. When he awoke he was deaf in one ear, his balance was skewed and his vision was splintered.
Doctors said that this changes were permanent but that his brain would form new connections. Apparently these new connections were artistic. He began to paint and now, his art is famous and featured in Vanity Fair and some art galleries.
Some of his paintings are even worth more than 10,000$ and considered as highly valuable. 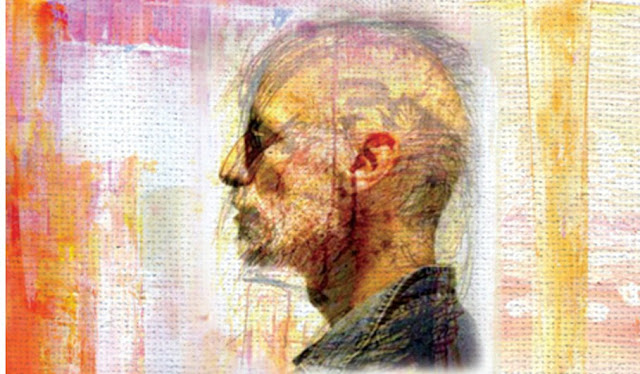 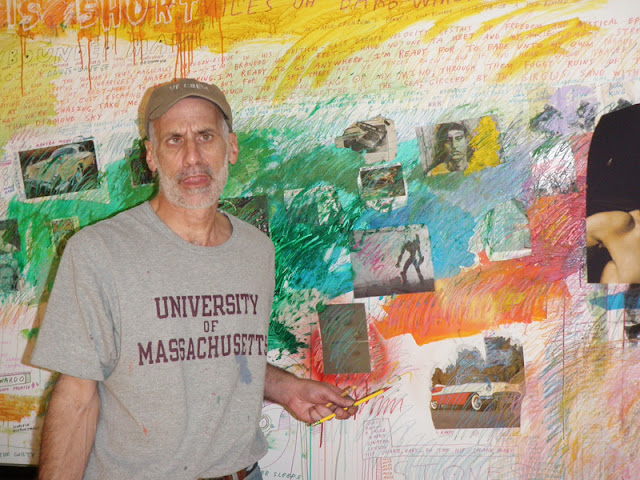 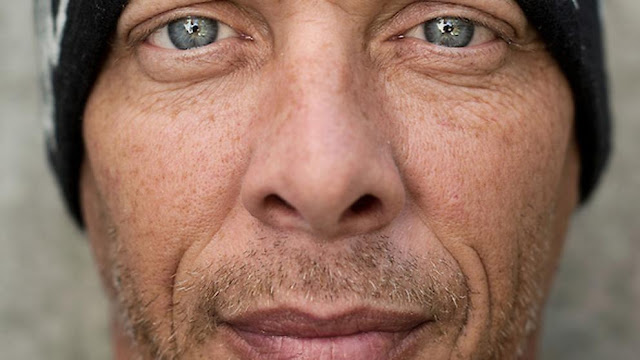 In 2002, Derek Amato became homeless after losing everything on a business investment, he wrote on his blog. “I was sleeping in my car at rest stops for 3 months while looking for a job,” he wrote.
He worked a string of jobs including public relations, karate teaching, sales and baseball coaching, without knowing what he truly wanted to do. He didn’t really felt a purpose.
In October 2006, Derek was partying with friends when he jumped into the pool and hit his head, reports Daily Mail.
After collapsing, Amato was rushed to hospital and diagnosed with a serious concussion. Doctors also found he had a permanent 35 per cent loss of hearing, as well as memory loss. But they didn’t expect that he would get A SUPER ABILITY!
The accident made him a musical genius!
Before, he didn’t know how to read music. Now he plays eight instruments he could not play before, as well as brushing up on his guitar skills, which he described as being a ‘2.5 out of 10’ before the accident.
“I woke up and I could suddenly play the piano” he says. Derek explained that he knew what to play as he could see black and white squares in his head that show him where to move his fingers.
“That’s my notation,” he said. “When those black and white squares are going, that’s what my hands do. I’m convinced it’s all for a reason and it’s my job to do it right.”
This super ability came as a godsend for the man who didn’t know what to do with his life.


But all of these people have one thing in common!
Superheroes in movies, once they get their superpowers, all of them focus on fighting evil, crime, saving people and eventually, the world.
But real people, once they get special abilities, they don’t start fighting crime. You don’t see Tony Cicoria acquiring the ability of throwing lightning bolts once he got struck by lightning, or Padgett using his math to protect the world from evil masterminds.
We are different than the superheroes we portray in our stories by one crucial element. We create them! We are not them, we create them, just like we create the villains, the good, the evil and the plot of these stories.
The one thing all of these people have in common is that, once they’ve acquired their superpowers, they started creating art. That’s their main focus!
You might wonder why can’t humanity be cooler. Why the focus of our superpower upgrades leans towards creating art?
The truth is, art is how we really fight the evil in the world, by fighting it at the source it comes from, within. Art is how we save people! Art is how we save the world!
The “hero” story is the most commonly told story all through our art forms because that’s the internal journey we embark on so that art can be created.
Art, music and performance, that is how we try to communicate with other people our internal journey, that’s how we try to show them that they too can be heroes, in their own journey!
That’s why most people who acquire superhuman abilities use them to create art. That’s how we save the world!
Sources: Live Science | New Scientist | dailymail.co.uk | youtube.com
This post was republished from lifecoachcode.com. You can find the original post here.