Even the highest saints have their dealings with the dark side. The story of Devadatta, Buddha’s jealous cousin, is no exception. Born into the same tribe as the Buddha, and brother to Ānanda – one of the Master’s closest students – Devadatta is depicted in Theravāda as the great villain of Buddhism, even perpetrating 3 failed assassination attempts on the saint. While contemporary scholars are in disagreement on the veracity of these details, it is generally agreed that Devadatta was a monk under the Buddha who suggested a much more rigorous practice, and may have even caused a major schism, leaving and taking hundreds with him to form his own, rival order.

Regardless, here is the most detailed account of the Buddha’s supposedly murderous cousin, “Devadatta, the Buddha’s Enemy“, from buddhanet.net. What this tale shows us is that, throughout history, it is the story of our personal relationships more than anything else that defines who we are. Just as loyalty, openness and compassion have existed as long as humans have been around, so have jealousy, deceit and subterfuge, even, it would seem, in the personal life of someone like the Buddha. {WP} 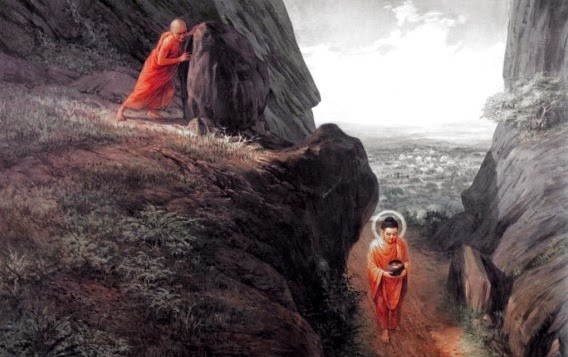 Devadatta was the son of King Suppabuddha and his wife Pamita, who was an aunt of the Buddha. Devadatta’s sister was Yasodhara, making him both a cousin and brother-in-law of the Buddha. Together with Ananda and other Sakyan princes, he entered the order of monks in the early part of the Buddha’s ministry, but was unable to attain any stage of sainthood and so worked hard for the worldly psychic powers.

In his early days, he was a good monk known for his grace and psychic powers. Later he became conceited with worldly gain and fame. As his ill-will and jealousy towards the Buddha increased, he became the greatest personal enemy of the Buddha.

One day in a large assembly, which included kings and princes, Devadatta approached the Buddha and asked him to make him the leader of the Sangha. Since he was not capable and worthy enough, the Buddha turned down this request. Devadatta became very angry as a result and vowed to take revenge on the Buddha.

Although Devadatta was an evil monk, he had many admirers and followers. One of his chief supporters was King Ajatasattu, with whom he discussed his anger and plots for revenge. Together they planned to kill King Ajatasattu’s father and rival, King Bimbisara and Devadatta’s enemy, the Buddha. Ajatasattu succeeded in killing his father, but Devadatta failed to kill the Buddha.

His first attempt to kill the Buddha was to hire a man to kill the Blessed One. The plan was that the man be killed by two other men who would in turn be killed by four other men. Finally the four men would be killed by eight other men. But when the first man came close to the Buddha, he became frightened. He put aside his weapons and took refuge in the Buddha. Eventually all the men who were hired to kill one another became disciples of the Buddha and the cunning plan failed.

Then Devadatta himself tried to kill the Buddha. When the Buddha was walking on the Vultures’ Rock, Devadatta climbed to the peak and hurled a huge stone at the Buddha. On its way down, the rock struck another rock and a splinter flew and wounded the Buddha’s foot, causing blood to flow. The Buddha looked up and seeing Devadatta, he remarked with pity, “Foolish man, you have done many unwholesome deeds for harming the Buddha.”

Devadatta’s third attempt to kill the Blessed One was to make the fierce man-killer elephant, Nalagiri, drunk with liquor. When Nalagiri saw the Buddha coming at a distance, it raised its ears, tail and trunk and charged at him. As the elephant came close, the Buddha radiated his loving-kindness (metta) towards the elephant. So vast and deep was the Buddha’s love that as the elephant reached the Buddha, it stopped, became quiet and stood before the Master. The Buddha then stroked Nalagiri on the trunk and spoke softly. Respectfully, the elephant removed the dust at the master’s feet with its trunk, and scattered the dust over its own head. Then it retreated, with its head facing the Buddha, as far as the stable, and remained fully tamed. Usually elephants are tamed with whips and weapons, but the Blessed One tamed the elephant with the power of his loving-kindness.

Still trying to be the leader of the Sangha, Devadatta tried yet another plan â€” a deceitful one. With the help of five hundred misled monks, he planned to split the Sangha community.

He requested the Buddha to make it compulsory for monks to follow five extra rules:

(i) Dwell all their lives in the forest..

(ii) Live only on alms obtained by begging..

(iii) Wear robes made from rags collected from the dust heaps and cemeteries..

(v) Refrain from eating fish or meat throughout their lives..

Devadatta made this request, knowing full well that the Buddha would refuse it. Devadatta was happy that the Buddha did not approve of the five rules, and he used these issues to gain supporters and followers. Newly ordained monks who did not know the Dharma well left the Buddha and accepted Devadatta as their leader. Eventually, after Venerable Sariputta and Venerable Moggallana had explained the Dharma to them, they went back to the Buddha.

After this, evil days fell on Devadatta. He fell very ill at the failure of his plans, and before his death he sincerely regretted his actions, and wanted to see the Buddha before he died. But the fruits of his evil karma had begun to ripen and prevented him from doing so. He grew desperately ill on the way to see the Buddha, near the gate of Jetavana monastery. But before he died he took refuge in the Buddha.