Great News for Garlic and Onions Lovers (and don’t forget the Peppermint)!

Personally, I have used garlic and onions in nearly all the meals I eat! For those of you who love these potent vegetables, know how much they can add to the depth of any flavor profile.

But did you know they are also major players in the prevention of cancer?

It’s true! In fact there have been many population studies that offer much evidence regarding the anti-cancer properties of garlic and onions.

The following is from The National Cancer Institute: 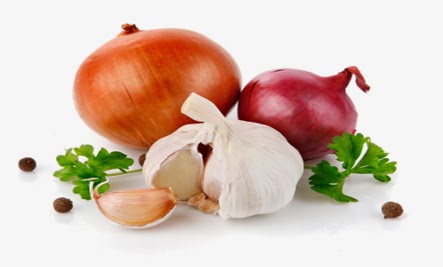 “Several population studies show an association between increased intake of garlic and reduced risk of certain cancers, including cancers of the stomach, colon, esophagus, pancreas, and breast. Population studies are multidisciplinary studies of population groups that investigate the cause, incidence, or spread of a disease or examine the effect of health-related interventions, dietary and nutritional intakes, or environmental exposures. An analysis of data from seven population studies showed that the higher the amount of raw and cooked garlic consumed, the lower the risk of stomach and colorectal cancer .

The European Prospective Investigation into Cancer and Nutrition (EPIC) is an ongoing multinational study involving men and women from 10 different countries. This study is investigating the effects of nutrition on cancer. In the study, higher intakes of onion and garlic were associated with a reduced risk of intestinal cancer.

The Iowa Women’s Study is a large prospective study investigating whether diet, distribution of body fat, and other risk factors are related to cancer incidence in older women. Findings from the study showed a strong association between garlic consumption and colon cancer risk. Women who consumed the highest amounts of garlic had a 50 percent lower risk of cancer of the distal colon compared with women who had the lowest level of garlic consumption.

Several population studies conducted in China centered on garlic consumption and cancer risk. In one study, investigators found that frequent consumption of garlic and various types of onions and chives was associated with reduced risk of esophageal and stomach cancers, with greater risk reductions seen for higher levels of consumption. Similarly, in another study, the consumption of allium vegetables, especially garlic and onions, was linked to a reduced risk of stomach cancer. In a third study, greater intake of allium vegetables (more than 10 g per day vs. less than 2.2 g per day), particularly garlic and scallions, was associated with an approximately 50 percent reduction in prostate cancer risk.

In addition, a study in France found that increased garlic consumption was associated with a statistically significant reduction in breast cancer risk. After considering total calorie intake and other established risk factors, breast cancer risk was reduced in those consuming greater amounts of fiber, garlic, and onions…”(i)

Well, the one thing that makes garlic and onions such a powerful cancer fighter, is its deliciously strong pungent smell and taste. It’s no secret that if you eat either or both (yum!) of these vegetables, your spouse, friends, and family will certainly know about it for hours!

Luckily, the answer to this culinary predicament is non-other than peppermint! And guess what?

“Peppermint holds promise as a potent herb against cancer and the effects of radiation. According to a study in 2010, liquid extracts of peppermint were shown to protect the gastrointestinal and hemopoietic systems from radiation. The healing properties in the extract are found to be metal chelating, antimutagenic, antioxidant, and anti-inflammatory. Additionally, DNA repair processes are enhanced. Tumors of the pancreas and liver are particularly vulnerable to the bio-active components of peppermint. Cancers of the skin, lung, and colon are also inhibited by this herb.” (ii)