Living the “Good Life”: The American Executive and the Mexican Fisherman..

An American executive was taking a much-needed vacation in a small village along the coast of Mexico. Early one afternoon, while standing on the pier looking out at the water, a tiny boat with just one fisherman docked. Inside were several large yellowfin tuna. The American complimented the Mexican on the quality of his fish, asking how long it took him to catch them. 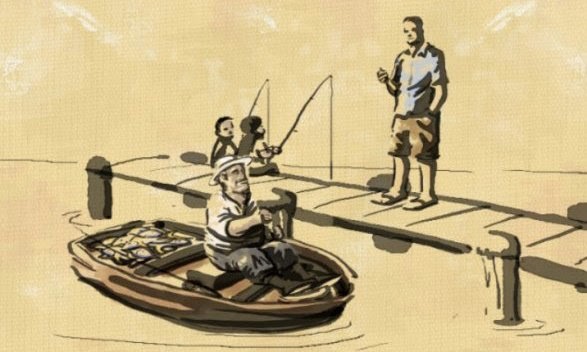 “Only a little while,” the Mexican replied.

The executive checked his watch. “It’s still early. Why don’t you stay out longer? You could catch a lot more.”

“This is enough,” the Mexican said, tying up the boat and beginning to get his gear together. “The fish aren’t going anywhere.”

“But what do you do with the rest of your time?”

“Well,” the Mexican replied, pausing for a moment, “I sleep late, fish a little, play with my children, take a siesta with my wife and stroll into the village every evening where I sip wine and play guitar with my friends.”

“Listen,” The American said, “You’re obviously quite good at catching fish. I am a Harvard MBA and I can really help you take this somewhere. The more time you spend out there fishing, the sooner you’ll be able to buy a bigger boat with far more accessories and the ability to harvest 10 times the fish you’re catching now. After that, with the proceeds from that bigger boat, you could buy another, and another, until you eventually own an entire fleet. Instead of selling your catch to a middleman you could sell directly to the consumers, opening your own canning factory after a time. You would control the product, processing and distribution.The only thing is, you’d need to leave the village here and move to Mexico City. Eventually you could even find yourself in LA or New York, the CEO of a major corporation!”

The Mexican eyed the Northerner carefully. “And how long will all this take?”

“Twenty to twenty-five years, give or take.”

The American laughed and said, “That’s the best part. When the time is right you’d announce an IPO – what we call an ‘Initial Public Offering’ – selling your company stock to the public and becoming very rich in the process. You’d make millions.”

The American looked around. “Well, then you’d be totally financially sound. You could retire in peace, moving back here – or to another beautiful village like this one. You could sleep late, fish a little, visit with your children, take a siesta with your wife and stroll into town in the evenings where you could sip wine and play your guitar with your friends, all without a worry in the world…”


- This article originally penned as “Anekdote zur Senkung der Arbeitsmoral,” (“Anecdote Concerning the Lowering of Productivity”) by Germany’s premiere post WWII writer Heinrich Böll, it has been told and retold across cultures in the decades since, appearing in print and online in various forms..