Did you know that studies now prove that the chemicals found in sweet potatoes can actually heal stomach ulcers? And not just any type of ulcers – Peptic Ulcers! These are the ulcers that so many people suffer from, which begin as ‘casual’ heartburn. Though there are many causes for the development of peptic ulcers, I think we can all agree that the Standard American Diet (SAD) is certainly a major contributor, along with the unrelenting stress of today’s “hurry it up” lifestyle! 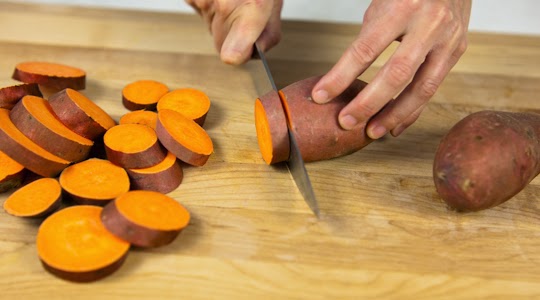 Typically, the treatment of choice for this condition in pharmaceutical medicine is none other than Nexium (esomeprazole) – available by prescription only. Another popular heartburn pharmaceutical is Prilosec – which is even more popular now, since it became available over-the-counter (OTC).

Don’t you just love the Prilosec commercial with “Larry the Cable Guy”? He is certainly my choice as a “health adviser” (yep, said with sarcasm!) What does he say? Something like “Americans love their food, so treat frequent heartburn with Prilosec OTC to block the acid that causes it – so you don’t get heartburn in the first place.”

OR…. wouldn’t improving your diet be a better choice?

More Than Just An Ordinary Spud..

A study published in Functional Foods in Health and Disease 2012 set out to find just how effective the anti-ulcer activity in sweet potatoes actually was against peptic ulcers. The results showed the following:

This translates to: The sweet potato was very effective!

By the way, Ipomoea batatas is simply the fancy scientific name for Sweet Potato.

All About Sweet Potatoes..

Though sweet potatoes are a starchy carbohydrate, they have something unique that those of you on a low carbohydrate diet AND diabetes will love! A low Glycemic Index (GI). This refers to how fast blood sugar levels rise after eating a certain food.

If a food has a high GI, this means the carbohydrate breaks down quickly and releases high amounts of glucose into the bloodstream quickly, triggering a surge of insulin. This then can quickly cause a drop in blood sugar making you feel fatigued and hungry again. A major issue with this cycle is that it can lead to obesity, diabetes, inflammation and other chronic health conditions.

The bottom line? The lower the GI level, the lower the blood glucose spike and the more sustained is energy released to the body. When using a GI scale, the reference number is 0 to 100, so any food getting close to 100 is considered having a high GI.

And guess what? The sweet potato has a LOW GI! Ranging from 40-50, depending on what source you use. In contrast, the white potato range averages from 60-90.

Even more good news! A recent study done at the University of Agriculture in Pakistan found the properties of the sweet potato may actually help those with diabetes. One of the contributing doctors, Dr. Jon Allen, CALS professor of Food Science said the following:

One of the issues with white potatoes (particularly for those who closely manage their blood sugar levels) is that their GI can actually change depending on the cooking methods used. So is that also true of the sweet potato? Research shows it is not the case. Published in the The Open Nutrition Journal, 2012, researchers found that:

And as if this weren’t enough to get you on the sweet potato train, more research published in Asia Pac J Clin Nutr 2008 showed that sweet potatoes can decrease lipid peroxidation, which is attributed to inflammation and contributes to:
Following this 2008 study, the researchers concluded that:

Though I am personally in favor of the Paleo diet, as with anything, not all shoe sizes fit everyone. My advice is to be smart and choose a dietary lifestyle that suits you best. You will know when you’ve found it because you will:
If you haven’t already, isn’t it worth revisiting this amazing spud – the Sweet Potato!