ANCIENT CHEROKEE INDIAN TALE OF THE ORIGIN OF ILLNESS..

There came a time when we humans forgot our place and broke the harmony. We humans began to reproduce at an alarming rate, and we gave ourselves to the production of all sorts of weapons meant for the destruction of the animals: spears and atlatls, bows and arrows, blowguns and traps of all kinds. We began to hunt, not just for food, but simply for the fun of killing. We humans also killed many animals just by pure carelessness, never stopping to think of the results of our actions. Even as we walked from place to place, we were not careful where we stepped, so that many of the tiny many-legged and legless ones were crushed to death or maimed. Some humans went so far as to purposely kill little animals merely from a feeling of disgust or loathing, going out of their way to step on a bug or squash a harmless spider. It was clear that we humans believed ourselves to be the only ones who mattered in all of creation, and as we continued clearing land and building our cities; it looked as if there would soon be no more room for anyone else to live in the earth. 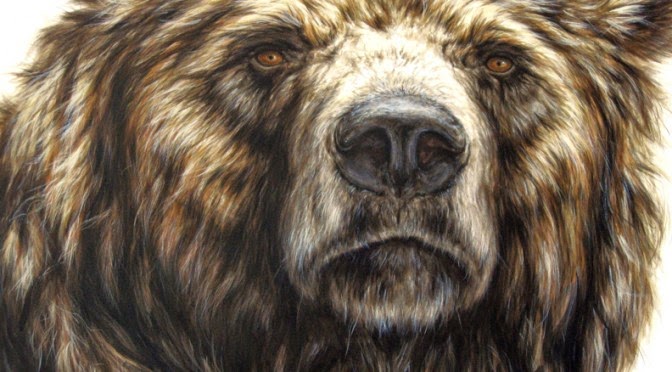 The animals decided something had to be done about this human problem. The bears met separately from the other animals. The Great White Bear, presiding at the council asked, “What’s the problem?”

“It’s these humans; they kill us indiscriminately.”

“With bows and arrows.”

“Of what are their bows made?”

“The bow of locust wood and the bowstring of our guts.”

The bears decided they would make bows of their own with which to kill the humans. They got some locust wood, and one of the bears sacrificed himself to give material for the bowstring. When the bow was finished and arrows were made, one of the bears stood up to shoot. He could pull the string, but releasing it was a problem. His long claws would get hung and throw him off target. The other bears, ducking his wild arrows, cried out, “Stop, stop. Something must be done. We’ll cut your claws.”

After the bear’s claws were cut, he could shoot a bow as well as any man. “Now the humans have had it!” all the bears said. “We will hunt them, as they have hunted us! All we have to do is cut our claws.”

“Wait!” said the Great White Bear. “How is it that we bears make our living?”

“By climbing trees to get honey and by ripping open rotten logs to find insects and by digging in the earth for rodents and by catching fish.”

“How do we do all these things?”

“With our long claws.”

The bears understood that if they cut their claws they could no longer make a living as bears and would starve to death. The idea to hunt the humans with bows and arrows was scrapped, and they never came up with another solution.

All the other animals came together in a joint council to discuss the human problem. The Grubworm presided at the council. After all, it was his people, the little creeping and crawling peoples of the earth, who had suffered most from the actions of the humans. The animals all sat in a circle. The talking stick was passed, giving each an opportunity to speak. The Toad said, “Something must be done. These humans despise me. They are forever kicking me or throwing things at me, because they think I am ugly. Just look at all the bumps they’ve put on my back!”

One of the little birds rose and said, “Although I’m too small to provide much meat, their little boys kill my people and roast us over the fire until our feathers and feet are burned off.” One after the other, the animals spoke of atrocities committed by the humans. The only one with nothing to say against the humans was the little chipmunk, who was too small to be hunted for food and too quick to be stepped on. When he spoke in defense of the humans, the other animals jumped on him and gave him such a scratching down his back that the stripes are there to this day!

Once it was established that something must be done about the humans in order to save the rest of creation, the floor was open for discussion of what to do. It was finally decided that each of the animal peoples would come up with at least one disease with which to inflict the humans, in order to kill most of them and to teach the rest some respect. Various animals attending the council agreed to come up with every sort of ailment from cancer to p.m.s. When the Grubworm heard this last one, he laughed so hard he fell over backwards and has been crawling around like that ever since.

So, all the animals went their separate ways to meet in council, each with their own kind, to work out the details of what they would do. The deer met in council, with their chief, Little Deer, presiding. The deer understood the humans to be a pitiful and needy people who live only by the deaths of others. For this reason, the deer decided to allow the humans to continue killing some deer each year, but only what is needed for food, NEVER FOR SPORT. Furthermore, a human hunter, upon killing a deer, is required to show respect for the spirit of the deer by begging the deer’s pardon and making a proper tobacco offering. And so, Little Deer, the chief and adawehi of all the deer will come. Swiftly and invisibly he will come to the place where the deer has died. Gently he will bend down over the blood. In a whisper, he will ask the spirit of the slain deer, “Did this hunter treat you with respect? Did he beg your pardon? Did he offer tobacco?”

Word was sent to the human people, and we Cherokees have not forgotten this treaty with the deer.

And so, many diseases came into the earth. Many people died. For a while, it looked as though maybe no humans would survive in the earth. The great cities were forgotten and fell into ruin.


The plant peoples who saw all of this, also elected to come together and meet in council. Deciding to take pity on us humans, each plant agreed to give of itself to provide medicine for at least one human disease or ailment. All we humans had to do was ask in a respectful way.