5 Harmful Narcissistic Manipulation Tactics You NEED To Watch Out For!

Narcissistic Personality Disorder is characterized by a long-standing pattern of grandiosity, an overwhelming need for admiration and a complete lack of empathy toward others. People with this disorder believe they are the most important person in everyone’s life. They often have no problem belittling, manipulating and stepping on others to gain attention or to get ahead. If you’re in a relationship with a narcissist, you may be the last one to realize it. This is because they are masters of manipulation. 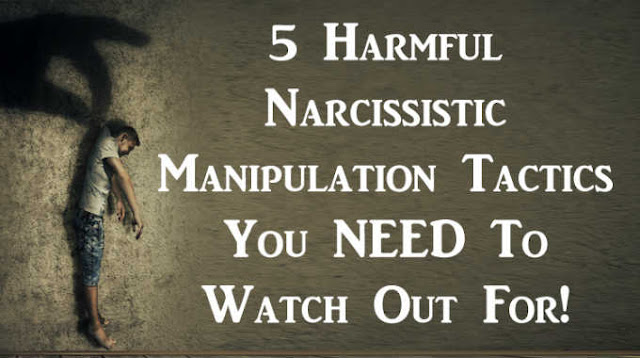 These are five of the most harmful narcissistic manipulation tactics:

1. Playing The Role Of The Victim

You are the one being victimized, but a narcissist is a pro at making you second guess that fact. They have a way of constantly turning things around to make themselves look like the victim in every situation. If they are late for something or they stand you up, they’ll tell you it’s because you didn’t tell them the correct date and time. Regardless of the situation, a narcissist will never take the blame. They’ll say things to make you question yourself and eventually, you’ll start believing them.

Whether it happens when you’re out in public or in the privacy of your own home, narcissists make a habit out of shaming. They make comments that belittle you and make you feel small, look weak or appear less intelligent than they are. These comments may be followed by “just kidding” or “can’t you take a joke?” But what they’re doing is completely intentional. Their goal is to hurt you and to make you feel small.

A master manipulator often uses gaslighting to gain complete control over another person in their life. Gaslighting is a type of manipulation that causes you to doubt your own sanity. If you bring up something hurtful that they said, they’ll tell you you’re crazy and they never said it. If you refer to a situation they don’t want to talk about, they’ll tell you that it never happened. They’ll accuse you of being to sensitive or tell you you’re tired or acting irrationally. After a while, you’ll begin to doubt your perception of reality. This type of manipulation is especially dangerous.

4. Being In Complete Control

A narcissist wants to be in complete control of everything. The conversation, meals, social outings, bills. One by one they begin taking over until you feel like you can’t survive without them. They might control what you wear, who you talk to or where you go. Eventually, you forget about what you want. You’re living in a world that they control.

When your relationship first started, the narcissist may have complimented you constantly. After a while, that changed. The compliments began to turn into things you need to change about yourself. They tell you that they don’t like your hair or your clothes. They tell you that you talk to much or that you’re not intelligent. The negative comments come so often that your self-esteem begins to suffer. You feel like you aren’t worth any more than what they say you are.
This post was republished from davidwolfe.com. You can find the original post here.