A tragic scene of chaos unfolded Tuesday morning in Syria as an estimated 58+ people—children included—were killed by what appears to be another sarin gas attack. Airstrikes exploded on the rebel city of Khan Sheikhoun in the Idlib province, releasing a “poisonous gas” according to an activist with the Aleppo Media Center (AMC), Anas al-Diab. Although no party has yet taken responsibility for the carnage, anti-Assad activists are already blaming the Syrian regime. 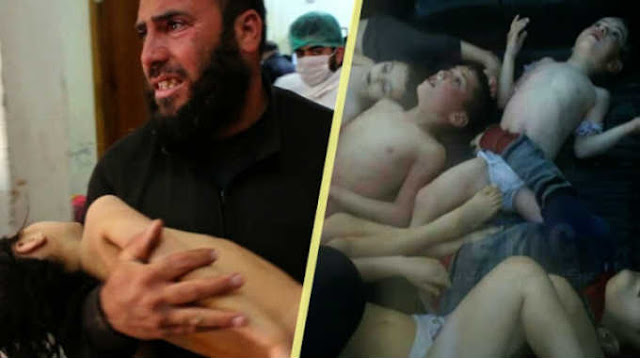 Horror At The Hospital
“I’ve never seen anything like it,” said Fares al-Jundi, a doctor on the scene at the hospital, “beyond description.”
Al-Jundi says an estimated 500 people were brought to the hospital, overburdening the medical staff.

“I believe this horrible memory will stay with me for the rest of my life,” said al-Jundi.
According to another doctor, whose identity has been kept anonymous for security reasons:
Today around 7:30 a.m., about 125 injuries arrived to our hospital. Twenty-five of them were already dead, 70 to 80% of the wounded people were kids and women.
The symptoms were pale skin, sweating, narrow or pin-eye pupils, very intense respiratory detachments. Those symptoms match the usage of sarin.

The estimated death toll numbers are conflicting at the moment, with the AMC tallying it at 70, while the Syrian Observatory for Human Rights counts 58. A separate source, the High Negotiations Committee, reported the death numbers as high as 100.
Later on in the day, a separate airstrike landed near a hospital in Khan Sheikhoun where some victims were being treated, injuring several more people.
The Idlib province has been controlled primarily by Syrian rebels and is a focal point for attacks by the government of Syria and,
reportedly, it’s “ally Russia.”
According to CNN, “In an apparent reference to the attack, two state-run Syrian media outlets reported that there was an explosion at a “rebel poison gas factory” in the countryside of Idlib province. The government has denied using chemical weapons in the past.”
Back in the United States, Senator John McCain—a long time critic of Bashar al-Assad—sounded off, saying:
“We’ve seen this movie before, it was when Barack Obama said they would have a red line, they crossed it and he did nothing. Bashar al-Assad and his friends, the Russians, take note of what Americans say.”
Sources: CNN | The New York Times | NPR