Morgan Freeman Justifes His Cannabis Use With This EPIC Response

Morgan Freeman is a well known actor, both on and off the big screen, and has been conscripted to narrate numerous documentary films.

What’s not often known about him is that he’s an activist for justice and the environment.

He even converted his 124 acre Mississippi ranch into a bee farm and sanctuary in response to dwindling pollinator populations.

Freeman is also known for activism regarding cannabis, once saying in an interview with the Guardian, “Never give up the Ganja.”

That line set him apart from many actors. It became clear that Freeman both enjoyed and advocated for cannabis and he clearly hasn’t stopped since.

Recently, the Daily Beast met up with Morgan Freeman to talk about an upcoming film, but the direction of the conversation changed to the topic of cannabis.

In it, Freeman talks about his appreciation of cannabis as well as the current movement to legalize. This is what he had to say. From The Daily Beast:

I ask him about his stance on the legalization of marijuana, since he’s a longtime user. “They used to say, ‘You smoke that stuff, boy, you get hooked!” says a chuckling Freeman.

“My first wife got me into it many years ago. How do I take it? However it comes! I’ll eat it, drink it, smoke it, snort it!

This movement is really a long time coming, and it’s getting legs—longer legs. Now, the thrust is understanding that alcohol has no real medicinal use.

Maybe if you have one drink it’ll quiet you down, but two or three and you’re fucked.” He pauses, and points to the glove-aid jutting out from his left suit sleeve. “Marijuana has many useful uses,” he says.

“I have fibromyalgia pain in this arm, and the only thing that offers any relief is marijuana.

They’re talking about kids who have grand mal seizures, and they’ve discovered that marijuana eases that down to where these children can have a life.

That right there, to me, says, ‘Legalize it across the board!'”

“And what negative effects does it have?” Freeman continues. “Look at Woodstock 1969.

They said, ‘We’re not going to bother them or say anything about smoking marijuana,’ and not one problem or fight.

Then look at what happened in ’99,” he says, referencing the less marijuana-friendly 30th-anniversary event, which resulted in riots and arrests. 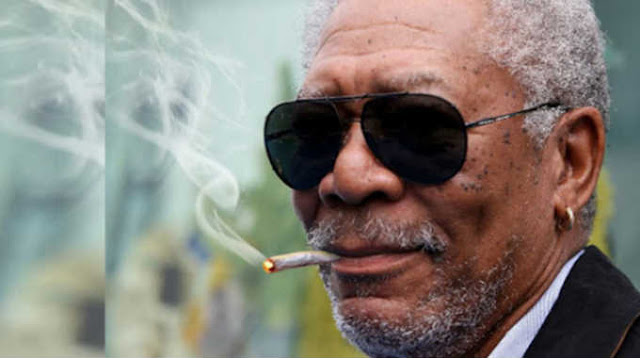