Japanese scientists are dumbfounded by the discovery

Japanese scientists are dumbfounded by the new discovery after conducting an autopsy on a large group of dolphins that where discovered washed up on a beach close to the Fukushima disaster site. 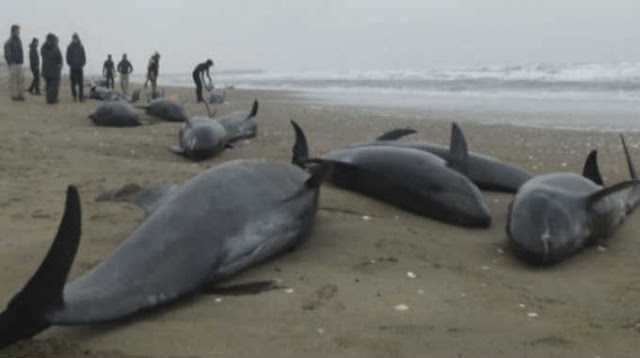 Each dolphins lungs were white, which is according to scientists, an indication of loss of blood to the organs - a symptom of radiation poisoning.

The translated article comes from EneNews:

Google Translate: Ibaraki Prefecture… for a large amount of dolphin which was launched on the shore… the National Science Museum… investigated… researchers rushed from national museums and university laboratory, about 30 people were the anatomy of the 17 animals in the field. [According to Yuko Tajima] who led the investigation.
“the lungs of most of the 17… was a pure white ischemic state, visceral signs of overall clean and disease and infections were observed”… Lungs white state, that has never seen before.

Systran: The National Science Museum investigated circumstance and cause etc concerning the mass dolphin which is launched to the seashore of Ibaraki prefecture… the researchers ran from the museum and the university laboratory… approximately 30 people dissected 17… [Yuko Tajima] of the National Science Museum which directed investigation research worker [said] “the most lung 17 was state with true white, but as for the internal organs being clean”… The lung true white as for state, says… have not seen.

Wikipedia: Ischemia is a vascular disease involving an interruption in the arterial blood supply to a tissue, organ, or extremity that, if untreated, can lead to tissue death.

Many reports have been published on the links between ischemia and radiation exposure:

“It has been shown that the ionizing radiation in small doses under certain conditions can be considered as one of starting mechanisms of… IHD [ischemic heart disease].” –Source

“Radiation risks on non-cancer effects has been revealed in the [Chernobyl] liquidators… Recently, the statistically significant dose risk of ischemic heart disease… was published.” –Source

“Incidence of and mortality from ischemic heart disease (IHD) have been studied in a cohort of 12210 workers [at] Mayak nuclear facility… there was statistically significant increasing trend in IHD incidence with total external gamma dose.” –Source

“In 1990 the International Chernobyl Project has been carried out under the aegis of the IAEA… It is known that the international experts who had taken part in the International Chernobyl Project were aware of the report by the Minster of the Ministry of Health Care of Belarus delivered at an informal meeting arranged by the IAEA… The Belorussian Minister reported about… the worsening of the general health state of the affected population… “Among adults in 1988 there was a two- to fourfold increase, in comparison with preceding years, in the number of persons suffering from… ischemic heart diseases” –Source

“In a study on a Russian cohort of 61,000 Chernobyl emergency workers… a statistically significant risk of ischemic heart disease was observed.” –Source