Boriska, A Boy From Mars Says That ALL Humans Live Eternally And “People Like Us Still Live On Mars”

A boy named Boris Kipriyanovich, or Boriska, lives in the town of Zhirinovsk of Russia’s Volgograd region. He was born on January 11, 1996. Since he was 4 he used to visit a well-known anomalous zone, commonly referred to as Medvedetskaya Gryada – a mountain near the town. It seems that the boy needed to visit the zone regularly to fulfill his needs in energy.

Boriska’s parents, nice, educated and hospitable people, are worried about their son’s fascinating talents. They do not know how others will perceive Boriska when he grows up. The say that they would be happy to consult an expert to know how to raise their wunderkind.

Being a doctor, his mother could not help but notice that the baby boy could hold his head already in 15 days after his birth. He uttered the first word ‘baba’ when he was 4 months old and started to pronounce simple words soon afterwards. At one year and a half he had no difficulties in reading newspaper headlines. At age of two years he started drawing and leaned how to paint six months later. When he turned two, he started going to a local kindergarten. Tutors immediately noticed the unusual boy, his uncommon quickwittedness, language skills and unique memory.

However, his parents witnessed that Boriska acquired knowledge not only from the outer world, but through mysterious channels as well. They saw him reading unknown information from somewhere.

“No one has ever taught him,” Boriska’s mother said. “Sometimes he would sit in a lotus position and start telling us detailed facts about Mars, planetary systems and other civilizations, which really puzzled us,” the woman said.

How may a little boy know such things? Space became the permanent theme of his stories when the boy turned two years old. Once he said that he used to live on Mars himself. He says that the planet is inhabited now too, although it lost its atmosphere after a mammoth catastrophe. The Martians live in underground cities, Boriska says.

The boy also says that, he used to fly to Earth for research purposes when he was a Martian. Moreover, he piloted a spaceship himself. It took place in the time of the Lemurian civilization. He speaks about the fall of Lemuria as if it occurred yesterday. He says that Lemurians died because they ceased to develop themselves spiritually and broke the unity of their planet.

When his mother brought him a book entitled “Whom We Are Originated From” by Ernest Muldashev, he got very excited about it. He spent a long time looking through the sketches of Lemurians, pictures of Tibetan pagodas, and then he told his parents of Lemurians and their culture for several hours non-stop. As he was talking, his mother noticed that Lemurians lived 70,000 years ago and they were nine meters tall… “How can you remember all this?” the woman asked her son. “Yes, I remember and nobody has told me that, I saw it,” Boriska replied.

In Muldashev’s second book “In Search of the City of Gods” he looked through pictures for a long time and recollected a lot about pyramids and shrines. Then he claimed that people would not find ancient knowledge under the Great Pyramid of Cheops. The knowledge will be found under another pyramid, which has not been discovered yet. “The human life will change when the Sphinx is opened, it has an opening mechanism somewhere behind the ear, I do not remember exactly,” he said.

Boriska is one of so-called indigo children. They start to appear on Earth as a token of the forthcoming grand transformation of the planet.

“No, I have no fear of death, for we live eternally. There was a catastrophe on Mars where I lived. People like us still live there. There was a nuclear war between them. Everything burnt down. Only some of them survived. They built shelters and created new weapons. All materials changed. Martians mostly breathe carbon dioxide. If they flew to our planet now, they would have to spend all the time standing next to pipes and breathing in fumes,” Boriska said.

“If you are from Mars, do you need carbon dioxide?”

“If I am in this body, I breathe oxygen. But you know, it causes aging.”

The boy has deep knowledge of space and its dimensions. He is also aware of the structure of interplanetary UFOs. He talks about that like an expert, draws UFOs on slates and explains the way they work. Here is one of his stories: “It has six layers. The upper layer of solid metal accounts for 25 percent, the second layer of rubber – 30 percent, the third layer of metal – 30 percent, and the last layer with magnetic properties – 4 percent. If we give energy to the magnetic layer, spaceships will be able to fly across the Universe.”

Boriska has a lot of difficulties with school. After an interview he was taken to the second grade, but soon they tried to get rid of him. He constantly interrupts teachers and says that they are wrong… now the boy has classes with a private tutor.

TAKE A LOOK AT THE FULL VIDEO OF BORISKA, A BOY FROM MARS: 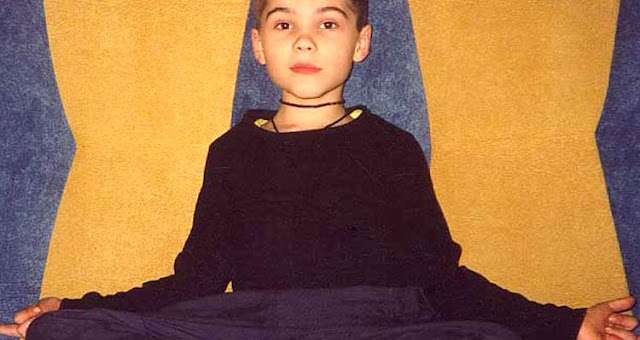