This Spine-Chilling Prediction By Carl Sagan Is Going Viral, And It Was Written 22 Years Ago

In the last few days, a quote from legendary astrophysicist Carl Sagan has gone viral because of how accurately it describes the current political climate in the US—despite the fact that Sagan died in 1996. The quote is from his book Demon-Haunted World: Science as a Candle inthe Dark, originally published in 1995.


Science is more than a body of knowledge; it is a way of thinking. I have a foreboding of an America in my children’s or grandchildren’s time—when the United States is a service and information economy; when nearly all the key manufacturing industries have slipped away to other countries; when awesome technological powers are in the hands of a very few, and no one representing the public interest can even grasp the issues; when the people have lost the ability to set their own agendas or knowledgeably question those in authority; when, clutching our crystals and nervously consulting our horoscopes, our critical faculties in decline, unable to distinguish between what feels good and what’s true, we slide, almost without noticing, back into superstition and darkness.

Amazingly, these comments were made during the Clinton administration, when the US economy was stronger than it’s been at any point since. But Sagan, who became world famous after he hosted the original Cosmos series, was always known as a forward-thinking man. (He could actually see beyond time, through the fourth dimension.)

And if you doubt that he was ahead of his time, just listen to this clip of him advocating for the legalization of marijuana with the same arguments that are used today.

Two decades after his death, Carl Sagan remains an inspiring but mystifying figure. 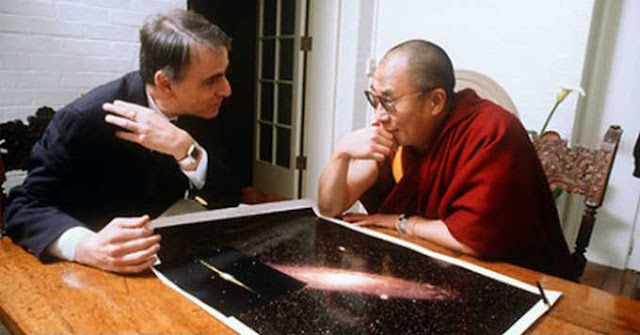