Deepak Chopra Explains the Secret of Donald Trump’s Success, and What You Can Do About It

By: The Power of Ideas

Donald Trump will be sworn in as the President of the United States of America on Friday 20th January, and many people are scratching their heads and wondering how this has happened.

Trump defies all conventional rules of politics. He’s a former reality television star who seems to take pleasure in offending entire groups of people, such as Mexicans, the disabled and Muslims. 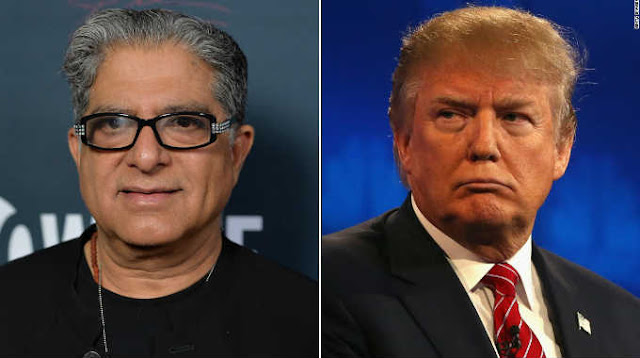 Trump seems to be an anomaly. Yet the author and doctor Deepak Chopra has a different perspective on the emergence of Donald Trump.

Chopra says Trump’s success comes from a side of human nature that exists inside all of us, and offers some steps for how we can combat this.

The secret side of human nature has a special name

In a recent article in Huffington Post, Chopra says Trump’s rise is based on the following:

“In reality Trump isn’t bizarre or anomalous. He stands for something universal, something right before our eyes. It’s an aspect of the human psyche that we feel embarrassed and ashamed of, which makes it our collective secret. Going back a century in the field of depth psychology, the secret side of human nature acquired a special name: the shadow.

“The shadow compounds all the dark impulses—hatred, aggression, sadism, selfishness, jealousy, resentment, sexual transgression—that are hidden out of sight. The name originated with Carl Jung, but its basic origin came from Freud’s insight that our psyches are dualistic, sharply divided between the conscious and unconscious. The rise of civilization is a tribute to how well we obey our conscious mind and suppress our unconscious side. But what hides in the shadows will out.”

According to Chopra, the shadow side is inside all of us, and it’s something we need to face head on.

“If Trump is the latest expression of the shadow, he isn’t a bizarre anomaly, which would be true if normal, rational values are your only standard of measure. Turn the coin over, making the unconscious your standard of measure, and he is absolutely typical. When the shadow breaks out, what’s wrong is right. Being transgressive feels like a relief, because suddenly the collective psyche can gambol in forbidden fields. When Trump indulges in rampant bad behavior and at the same time says to his riotous audiences, “This is fun, isn’t it?” he’s expressing in public our ashamed impulse to stop obeying the rules.”

The danger that Chopra foresees is the shadow forces getting out of control, as we saw in the first half of the twentieth with two world wars. Therefore, Chopra offers each of us some steps for looking within and confronting the shadow side that exists in all of us.

After all, the best way to change the world is to change ourselves.

01. See Trumpism for what it is, a confrontation with the shadow.

02. Instead of demonizing him, acknowledge that the shadow is in everyone and always has been.

03. At the same time, realize that the shadow never wins in the end.

04. Find every opening to reinforce the value of returning to right and reason in your own life.

05. Don’t fight the shadow with the shadow, which means not stooping to play by Trump’s nihilistic rules—he will always be willing to go lower than you are willing to go.