This School Custodian’s Home Burns Down And Community Surprises Her With A New One..

CAMPOBELLO, SC (FOX Carolina) - A group of Spartanburg County high school students and volunteers with Carpenters for Christ unveiled a Campobello woman's new home Tuesday, one year after her home burned down.

The volunteers and well-wishers gathered for a "Move That Bus" revealing and dedication service for Brenda Hurst Tuesday afternoon.

Hurst is a custodian at Boiling Springs High School. She lost her home in a fire in June 2014, but she has had help for several months getting her new home rebuilt thanks to the community.

Students at the high school launched a fundraising effort to rebuild Hurst's home and later partnered with the nonprofit organization Carpenters for Christ, who oversaw the construction.

On Tuesday, Hurst's students, friends, family and members from the more than 90 businesses who donated materials and services, were on hand as Hurst was shown the home for the first time.

“This is just awesome, God is good,” said Hurst.

Area high school students pitched in to build the house as part of an on-the-job training program at Swofford College.

Hurst's new home is a 2 bedroom, 2 bath home with open kitchen and carport. Hurst says her favorite feature is her bedroom's large closet.

“It's humongous. It's really big and it's got so much storage space,” said Hurst..

Did You Enjoy The Story? Then Don't Forget To SHARE This For The Others.. 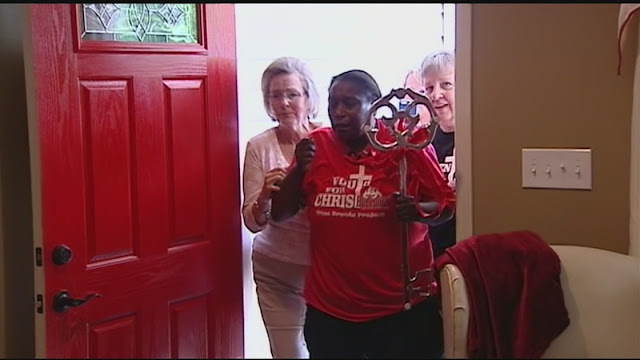