Forget scaling mountains surrounded by glorious scenery, or high-speed thrill seeking missions on four wheels around the Autobahn, this road rage incident right here is exactly why the GoPro was invented.

The footage comes straight out of Arizona and shows the perspective of a motorbike rider and his partner who are apprehended by a very, VERY angry man who has some sort of gripe about, well, probably nothing to be honest. 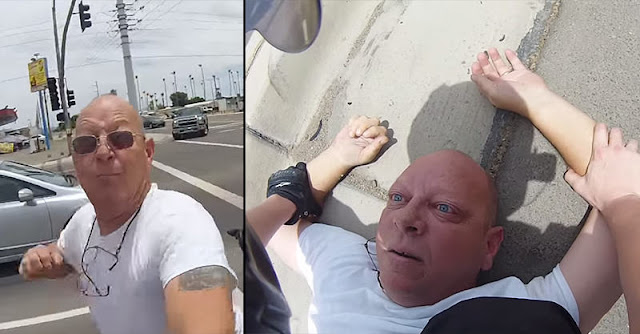 Usually with these kind of confrontations there is a good few minutes of shit talk beforehand, but the bald headed antagonist in this movie does not hang around and it’s a matter of seconds until the first haymaker is thrown and you realise you are watching something pretty special.

However, it doesn’t last long, as the motorbike rider quickly ousts the situation with a swift flooring and holds the man down until help arrives.

The description of the video reads:

"Driver of the car apparently broke his ankle when he went to the ground, which is why I’m told he did not go to jail. He has multiple charges against him including endangerment, threatening, and assault. Myself and the police officers I spoke with clearly believe he was under the influence of something. Court date pending."

Top work by the cameraman (and victim in this case) for reacting calmly and diffusing the situation properly.


It’s not often you see such cool-headed-ness in these sorts of videos.