It was a quiet evening when Ryan Cook and his two friends grabbed a bite at a Chick-fil-A restaurant in Corpus Christi, Texas. The three teenage boys looked over and spotted a homeless man sitting at a nearby table. The man, Eddie, was counting his change and struggling to find enough money for a meal.

Eddie had a worn Bible on the table, along with a photo of Jesus. The Chick-fil-A staff said Eddie came into the restaurant often, but hardly ever asked for handouts — except for when it came to his beloved dog, Socks. Any food Eddie receives goes to Socks first, and he frequently walks in looking for water to fill the dog’s bowl.

On that night, however, things were about to take a surprising turn for Eddie and Socks. The three teenage friends — Ryan, Joshua, and Alberto — bought Eddie some gift cards to Chick-fil-A.

However, they decided that wasn’t good enough.

The teens left the restaurant and headed over to Dick’s Sporting Goods. They spent $50 on a brand-new jacket, a winter hat, three shirts and a first-aid kit. Dick’s also donated $20 and some extra display items. 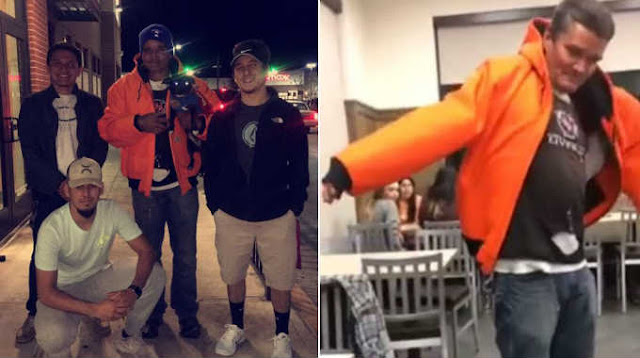 Ryan started recording on his cell phone as they walked back inside the restaurant. There was Eddie, still sitting at the table and counting his change.

Eddie’s reaction, recorded in the clip below, is something everyone should see. “Just setting an example for everyone else,” Ryan wrote on Facebook. “Be selfless and do good for others, then the world would be a better place for everyone. Felt the need to post this to inform others to do better, not to gain anything from it.”