NASA's Kepler Telescope has stumbled upon one of the most fascinating discoveries so far – a colossal artificial megastructure believed to have been constructed by an advanced alien civilization. 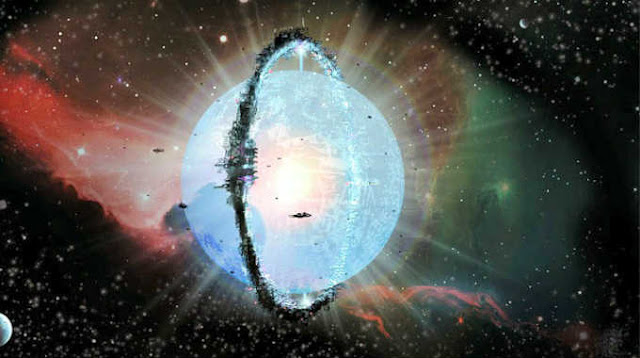 This time however, Kepler detected the signal of a supposed vast artificial structure orbiting a star only 1,500 light years away from Earth.

After finishing all plausible explanations, scientists now believe that this complex structure might be an artificial construction made by an advanced alien civilization way up on the Kardashev scale of comparison.

This megastructure works like a supersized solar array orbiting around its host star, stocking the energy and sending it back to the source. The size of the structure is so grand that it’s blocking a considerable fraction of starlight as it spins around its host.

Normally all the exoplanets discovered by Kepler have a typical planet-shape, meaning they are round. This time however, the telescope detected something that isn’t round and behaves unnatural.

A paper has been submitted to the journal Monthly Notices of the Royal Astronomical Society in which a particular star named KIC 8462852 is described.

“Over the duration of the Kepler mission, KIC 8462852 was observed to undergo irregulary shaped, aperiodic dips in flux down to below the twenty percent level. We’d never seen anything like this star, it was really weird. We thought it might be bad data or movement on the spacecraft, but everything checked out.” – Tabetha Boyajian, researcher at Yale University

The first event showed a single transit causing a star brightness drop-off of 15 percent, while the second event manifested as a burst of several transits, possibly indicating towards mass of different objects, resulting in a brightness dip of up to 22 percent. For such a major dip in brightness to occure, the transiting objects have to be extremely big.

Considering that our galaxy has existed for more than 13 billion years, it’s not hard to imagine that an alien civilization may be out there, possessing technology that allows them to build megastructures around stars.

“Aliens should always be the very last hypothesis you consider, but this looked like something you would expect an alien civilization to build.” – Jason Wright, astronomer from Penn State University told the Atlantic.

After analyzing all possible situations, scientists concluded that this strange anomaly might be the result of a group of dormant comets recently disturbed by a nearby star. Because this theory is not all that convincing, other researchers are already hypothesizing the possibility of a mega-engineered project created by a Type 2 alien civilization on the Kardashev scale.

This type of aliens would have the ability to use all the available energy radiating from a star. With the help of a vast shell or series of rings surrounding a star, a Dyson sphere-like structure could be constructed. This would block out the star from sight in visible wavelengths, but once the solar energy has been utilized by the alien civilization, the energy would be shifted to longer wavelengths and probably lost as infrared radiation.

Puzzled by these strange recordings, scientists are now trying to point a radio antenna at KIC 8462852 in order to solve the riddle. By doing so, they will be able to detect any artificial radio signals coming from the star and will determine whether or not an intelligent, Type 2 civilization exists in our vicinity, only 1,500 light-years away.

Meanwhile, a second paper is being drafted by top researchers in order to analyze the transit scenario focusing around the possibility of a colossal artificial device engineered by advanced aliens.