Turns out that almond milk you’ve been diligently adding to your morning coffee instead of full-fat, grass-fed, delicious cream actually contains almost no almonds. Like me, you are probably pissed off because you thought you were being all healthy and told yourself that, all the while thinking: “this stuff tastes like dirty water,” but it’s OK because, it’s good for me.

Turns out you were close to being correct about the dirty water because, Almond Breeze’s UK website disclosed that each carton of their almond milk only contains two percent of actual almonds costing unsuspecting consumers $3-$5 for 32 fluid ounces. 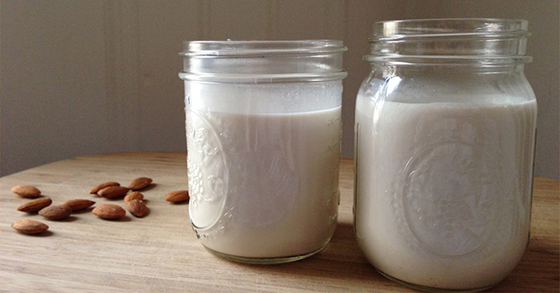 And, if you have ever made it from scratch at home using 100 percent almonds—you know that it takes way more than just that 2 percent amount of almonds to produce even a cup of almond milk (there’s a recipe below if you do care to make your own and I promise, you will never go back to the carton).

Well, you may have your revenge for having to drink this swill as Almond Breeze is being sued for false advertising. More specifically for “[deceiving] customers into thinking that they’re buying a product made from almonds,” according to a report on the lawsuit by Time.

Almond Breeze responded in part by saying: “The primary ingredient in nearly all popular beverages including coffee, tea, soda, juice and sports drinks is water. Cow’s milk is 85% to 95% water and the same can be said for most soy and almond milks which is why our brand is not alone in responding to recent claims.” So… you might consider this when buying any of these milk substitute beverages. And, why not learn to make your own? It’s unbelievably simple!