8 Hours After Quitting Smoking … What Happens To Your Body?

And people say it’s bad to be a quitter!?! Look at all the great things that happen as soon as you quit smoking: 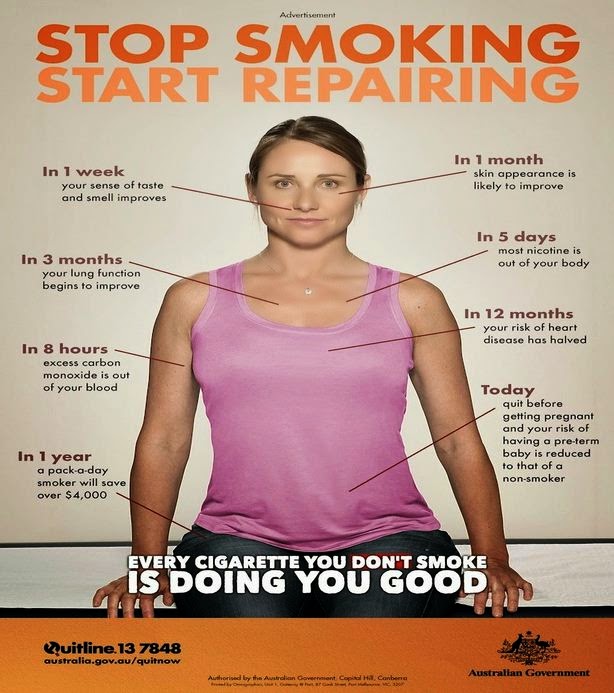 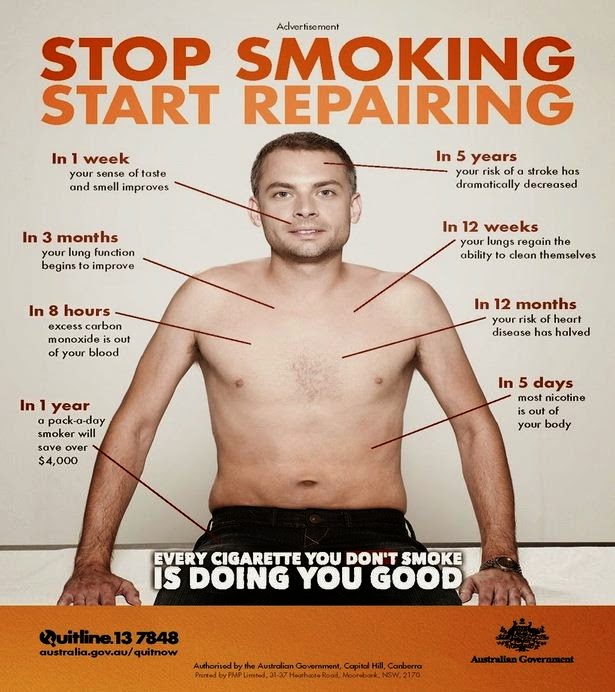 The Effects of Smoking on the Body..

Tobacco smoke is enormously harmful to your health. There’s no safe way to smoke. Replacing your cigarette with a cigar, pipe, or hookah won’t help you avoid the health risks associated with tobacco products.

Cigarettes contain about 600 ingredients. When they burn, they generate more than 7,000 chemicals, according to the American Lung Association. Many of those chemicals are poisonous and at least 69 of them can cause cancer. Many of the same ingredients are found in cigars and in tobacco used in pipes and hookahs. According to the National Cancer Institute, cigars have a higher level of carcinogens, toxins, and tar than cigarettes.

When using a hookah pipe, you’re likely to inhale more smoke than you would from a cigarette. Hookah smoke has many toxic compounds and exposes you to more carbon monoxide than cigarettes do. Hookahs also produce more secondhand smoke.

In the United States, the mortality rate for smokers is three times that of people who never smoked, according to the Centers for Disease Control and Prevention. It’s one of the leading causes of preventable death.
One of the ingredients in tobacco is a mood-altering drug called nicotine. Nicotine reaches your brain in mere seconds. It’s a central nervous system stimulant, so it makes you feel more energized for a little while. As that effect subsides, you feel tired and crave more. Nicotine is habit forming.

Smoking increases risk of macular degeneration, cataracts, and poor eyesight. It can also weaken your sense of taste and sense of smell, so food may become less enjoyable.

Your body has a stress hormone called corticosterone, which lowers the effects of nicotine. If you’re under a lot of stress, you’ll need more nicotine to get the same effect.

Physical withdrawal from smoking can impair your cognitive functioning and make you feel anxious, irritated, and depressed. Withdrawal can also cause headaches and sleep problems.
When you inhale smoke, you’re taking in substances that can damage your lungs. Over time, your lungs lose their ability to filter harmful chemicals. Coughing can’t clear out the toxins sufficiently, so these toxins get trapped in the lungs. Smokers have a higher risk of respiratory infections, colds, and flu.

Withdrawal from tobacco products can cause temporary congestion and respiratory pain as your lungs begin to clear out.

Children whose parents smoke are more prone to coughing, wheezing, and asthma attacks than children whose parents don’t. They also tend to have more ear infections. Children of smokers have higher rates of pneumonia and bronchitis.
Smoking damages your entire cardiovascular system. When nicotine hits your body, it gives your blood sugar a boost. After a short time, you’re left feeling tired and craving more. Nicotine causes blood vessels to tighten, which restricts the flow of blood (peripheral artery disease). Smoking lowers good cholesterol levels and raises blood pressure, which can result in stretching of the arteries and a buildup of bad cholesterol (atherosclerosis). Smoking raises the risk of forming blood clots.

Blood clots and weakened blood vessels in the brain increase a smoker’s risk of stroke. Smokers who have heart bypass surgery are at increased risk of recurrent coronary heart disease. In the long term, smokers are at greater risk of blood cancer (leukemia).

There’s a risk to nonsmokers, too. Breathing secondhand smoke has an immediate effect on the cardiovascular system. Exposure to secondhand smoke increases your risk of stroke, heart attack, and coronary heart disease.
Some of the more obvious signs of smoking involve the skin. The substances in tobacco smoke actually change the structure of your skin. Smoking causes skin discoloration, wrinkles, and premature aging. Your fingernails and the skin on your fingers may have yellow staining from holding cigarettes. Smokers usually develop yellow or brown stains on their teeth. Hair holds on to the smell of tobacco long after you put your cigarette out. It even clings to nonsmokers.
Smokers are at great risk of developing oral problems. Tobacco use can cause gum inflammation (gingivitis) or infection (periodontitis). These problems can lead to tooth decay, tooth loss, and bad breath.

Smoking also increases risk of cancer of the mouth, throat, larynx, and esophagus. Smokers have higher rates of kidney cancer and pancreatic cancer. Even cigar smokers who don’t inhale are at increased risk of mouth cancer.

Smoking also has an effect on insulin, making it more likely that you’ll develop insulin resistance. That puts you at increased risk of type 2 diabetes. When it comes to diabetes, smokers tend to develop complications at a faster rate than nonsmokers.

Smoking also depresses appetite, so you may not be getting all the nutrients your body needs. Withdrawal from tobacco products can cause nausea.
Restricted blood flow can affect a man’s ability to get an erection. Both men and women who smoke may have difficulty achieving orgasm and are at higher risk of infertility. Women who smoke may experience menopause at an earlier age than nonsmoking women. Smoking increases a woman’s risk of cervical cancer.

Smokers experience more complications of pregnancy, including miscarriage, problems with the placenta, and premature delivery.