A Woman Posted a Photo to Facebook With Her Children Smiling Next to the Casket of Her Dead Husband..

An Ohio mother, whose husband died of an apparent heroin overdose, uploaded to Facebook a photo of herself and her two children posing with smiles beside her husband’s open casket, saying she made the unusual move as part of efforts “to show the reality of addiction.”

On Thursday, she uploaded to Facebook and Instagram a photo of herself, standing with their two children, Luca and Ava, by her husband’s casket with smiles. She said the photo, which shows her husband lying lifeless in the open casket, was meant to warn others about the dangers of drug addiction. 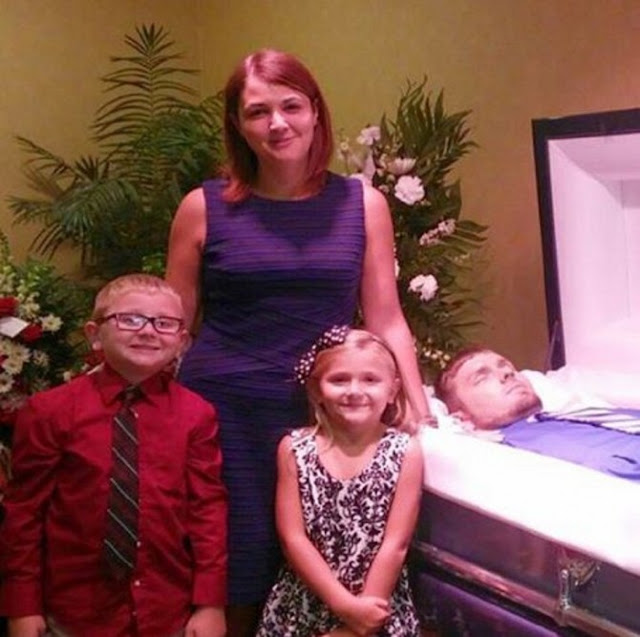 Commenting on the photo on Facebook, Holland said it illustrates the “cold hard truth” that heroin kills, pointing out that her husband’s death was preventable.

“The cold hard truth is heroin kills. You may think it will never happen to you but guess what that’s what Mike thought too.”

The photo and the message went viral last weekend, with tens of thousands of views.

According to Holland, Settles first became addicted to painkillers before he began taking heroin. After years of battling addiction, the young father checked into rehab. He left rehab “a brand new person,” just in time to spend Christmas with his family, but relapsed soon after and died of overdose in Cincinnati.

The relapse occurred after he took a “single pill” for a toothache, Holland wrote.

At the funeral last week, Holland decided to pose with her children smiling beside her late husband’s casket. She then uploaded the photo to her Facebook and Instagram pages with an explanation that went viral last weekend with tens of thousands of views.

“I’m sure this photo makes a lot of people uncomfortable it may even p**s a few people off but the main reason I took it was to show the reality of addiction.”

“If you don’t choose recovery every single day this will be your only way out,” she wrote. “No parent should have to bury their child and no child as young as ours should have to bury their parent. This was preventable. Itdidn’t have to happen but one wrong choice destroyed his family. I know a lot of people may be upset I’m putting it out in the open like this, but hiding the facts is only going to keep this epidemic going.” 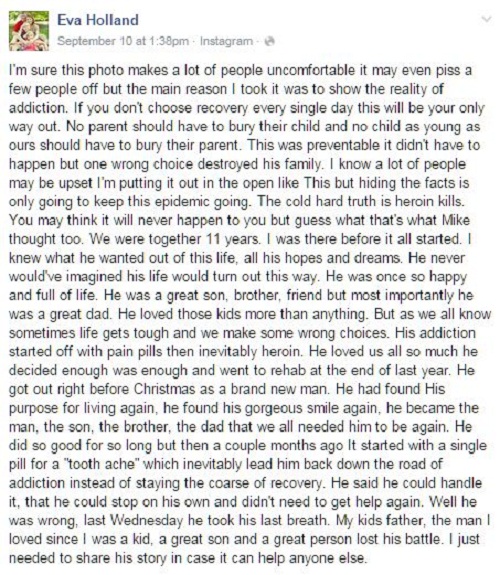 Holland and Settles had been together for 11 years — since Settles was 15-years-old — before he died. They had two children — Lucas and Ava. Settles began taking drugs years after the two first met, when they were only teenagers.

“His addiction started off with pain pills then inevitably heroin,” Holland wrote. “He loved us all so much he decided enough was enough and went to rehab at the end of last year. He got out right before Christmas, a ‘brand new man.’ ”

“He did so good for so long but then a couple months ago it started with a single pill for a ‘toothache’ which inevitably led him back down the road of addiction instead of staying (on) the course of recovery. He said he could handle it, that he could stop on his own and didn’t need to get help again.

Well, he was wrong. Last Wednesday he took his last breath. My kids’ father, the man I loved since I was a kid, a great son and a great person lost his battle.

I just needed to share his story in case it can help anyone else.”

Responses to Holland’s photo and message were overwhelmingly favorable.

“You are an inspiration to a lot of people. May God have his hands around you all, full of grace & kindness? You are in my prayers.”

“Thank you Eva Holland for your strength. I pray for your sorrow and hope you find peace as soon as possible.” 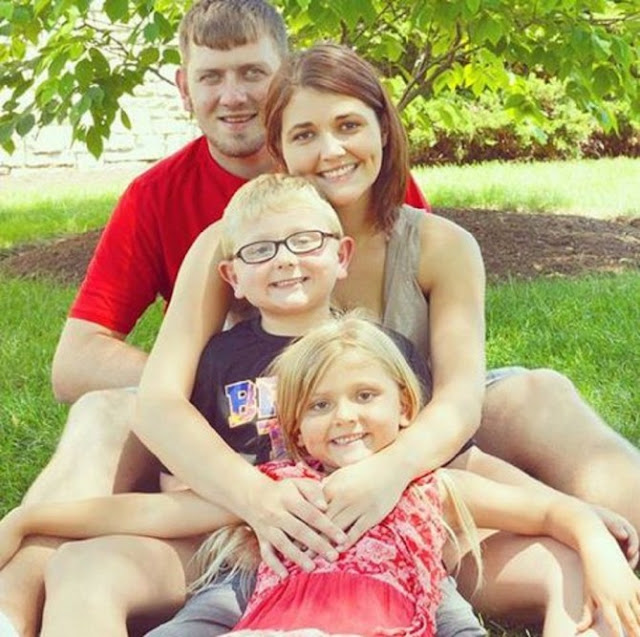 Holland said that since she posted the photo, many people have shared stories of their personal struggles with drug addiction. Many have sent messages saying that her photo spurred them on a path to recovery.

A few days after she posted the photo, Holland wrote on Facebook that a woman ran up to her in public crying. The woman hugged her and told her that the photo had helped her to avoid overdosing.

“This lady ran up to me crying and asked if she could hug me. I thought she was just having a bad day so I hugged her.

She said ‘I am a heroin addicted (sic) and was going to try and overdose last night but then I see you post and you saved my life. I can never thank you enough!’

So we stood there hugging each other crying. This right here is what it’s all about.”