In March, Morales brought home his babies, two months after they were born premature. His wife, Erica, 36, died hours after she gave birth, leaving him to be a single father while dealing with his grief.

He says the babies consume every hour of his day.

“Any time I walk out of my room, [I] walk around [and] make sure how many babies I got,” Morales told KSAZ.

He says his wife would have done everything in her power to make the milestone special. “She would be happy, dancing around trying to do something for me,” he mused.

The last time they saw each other was when he kissed her on the head and told her he loved her before she went into LABOR at Banner Good Samaritan Hospital. Now, he has a team of supporters helping him raise Tracy, Carlos Jr, Paisley and Erica.

His mother-in-law, Sondra Bridges, has moved into the home and serves as a maternal figure to the infants.

“He’s a wonderful father,” Bridges told KSAZ. “He’s just the same as he would have been when she was here.”

Morales says his wife was the love of his life, and he’ll do whatever he can to make sure their children are provided for.

“I want them to know that I’m a regular guy looking out for them and make sure they feel special because they are special to me and they will always be special to me.”


Watch coverage of this story below. 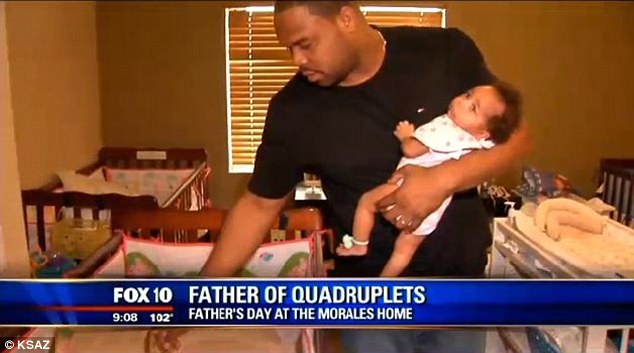