David Rockefeller, ‘One of The Most Evil Men Alive’ Is Finally Dead at 101

Conspiracy theorists the world over can rejoice! One of the most notoriously evil men in the world is no longer with us.
Former Chase Manhattan Chief Executive David Rockefeller has died at the age of 101.
Rockefeller died in his sleep at home in Pocantico Hills, New York, on Monday morning as a result of congestive heart failure, according to a family spokesperson Fraser P. Seitel. 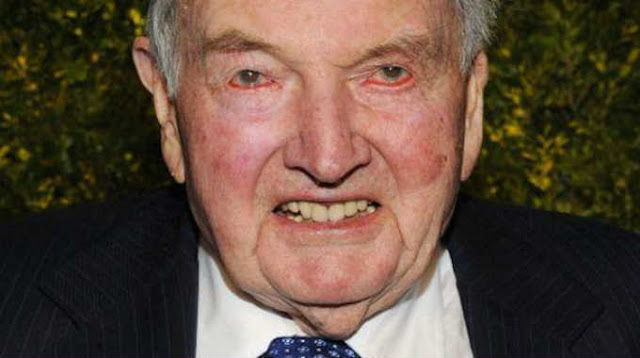 The businessman, who had an estimated fortune of $3 billion, retired as head of Chase Manhattan in 1981 after a 35-year career.

David Rockefeller: An Immoral Life of Evil and Treason

For every second in David Rockefeller’s long life, he’s been one of the wealthiest human beings on the planet. Like the devil in the song by the Rolling Stones, he has always been a man of wealth and taste. Growing up in a nine story house full of Renaissance treasures doesn’t make a normal child. If he were ever elected President of the United States of America, it would be a demotion.
David Rockefeller is the only surviving grandson of America’s first billionaire, John Davison Rockefeller.
Because of his tremendous fortune and influence, David Rockefeller was at the forefront of the minds of every conspiracy theorist. He’s even got a character on hit cartoon show, The Simpsons, that for all the world seems to be modeled after him (Mr. Burns).
It is impossible to imagine walking a mile in his shoes. But how can we be so quick to judge a life most of us could never begin to comprehend? Read on for more facts that make it exceedingly easy to dislike such a person.

How Much Money Does David Rockefeller Have?

What is David Rockefeller worth? You will find many *cough* “official statements” on seemingly reputable websites that cite an obscene number, but you shouldn’t believe it because the real number won’t be found.
Call it a “404 page not found” error if you like, but David’s grandfather was the first billionaire in America, and if you know how “it takes money to make money,” then you know the official numbers are just bunk junk for public consumption. If you were one of the wealthiest men on the planet, then you would surely prefer that people believe that Bill Gates is worth more than you, and you’d only leave a trail for a very small portion of your wealth. This is what David Rockefeller has done.
He’s rumored to be worth over a trillion dollars, but Wikipedia says he’s worth only $2.9 billion, which is a number so ridiculously low one has to wonder if the person who put it there knows how to balance their own bank account. Wikipedia is terrific for facts, but only if they fit the agendas of the global oligarchy.
How much money did John Davison Rockefeller have? Well, according to “politically correct” sources on what is really controlled information on the internet, David Rockefeller’s grandfather had just $1 billion (adjusted for inflation, that amount today would be $318.3 billion). Large sums of his fortune were donated to causes like medical research, but to assume that David Rockefeller inherited less than $3 billion from his grandfather would be rather silly.
Now, let’s try to adjust that total for inflation and add interest accrued… would anyone like to attempt the math? We haven’t discussed how much David made in his lifetime. But still, even conservative estimates are completely, utterly obscene.
How did they obtain so much vast wealth? Well, a lot of it is blood money or money stolen from the poorest of the poor. I shall explain..


Being obscenely rich is one thing, but why do so many people believe David Rockefeller was pure evil?

Did you notice people are happy about his death? That’s because David Rockefeller was a huge part of virtually every secret elite organization on the planet. He had his hands in the military industrial complex, profiting from pretty much all the wars. He has secretly had his hands in the arms industry and was a major player among the banking cartels for decades. He was even rumored to be part of organ trafficking, sex slaves and other black market illegal trading. His work under the guise of ‘philanthropy’ has caused the deaths and needless suffering of millions.
If you know who a person’s friends are, you can then tell what sort of person he is. David Rockefeller and Henry Kissinger have been very close friends since they first met in 1954. Why do people consider Henry Kissinger to be so evil? Answer that one, and you’ll know the same thing is true about Rockefeller. Despite the monumental power and international influence Kissinger has wielded over the past several decades, even more is wielded by David Rockefeller.
In the US, since the false flag attacks upon our own nation by global oligarchy on 9/11, the people of the nation have seen tremendous drops in their personal wealth, and also huge losses in jobs and opportunities. This has all been part of the plan for the banking cartels, and millions now know it. Many people believe Rockefeller was DIRECTLY INVOLVED with the funding and planning of 9/11.
For some it sounds far fetched, but for those who have dug deeper into this subject they know there is a lot of damning evidence to prove it, but there was never anyone powerful enough that was willing to take him to court.
Some whistleblowers have spoken up, with evidence, but they were all murdered. Most notably Aaron Russo. You should hear what he had to say!


So why do people hate David Rockefeller? A terrific answer would be because he hates us, wants global governance, and is actively pursuing whatever evil he thinks needs doing in order to make that happen.
While only purposeful ignorance or stupidity could lead one to be satisfied with the current state of affairs in Washington D.C., most people still very much love this country. Only terrific strain and sorrow would force citizens submit to any outside governance, but David Rockefeller’s life has been dedicated towards such ends. People are right to have and to hold total hatred for Mr. David Rockefeller’s actions on planet Earth, and especially in regards to his nation of birth.

David Rockefeller – A Life of Deceit and Dishonor

WE ARE GRATEFUL TO THE WASHINGTON POST, THE NEW YORK TIMES, TIME MAGAZINE, AND OTHER GREAT PUBLICATIONS WHOSE DIRECTORS HAVE ATTENDED OUR MEETINGS AND RESPECTED THEIR PROMISES OF DISCRETION FOR ALMOST FORTY YEARS. IT WOULD HAVE BEEN IMPOSSIBLE FOR US TO DEVELOP OUR PLAN FOR THE WORLD IF WE HAD BEEN SUBJECT TO THE LIGHTS OF PUBLICITY DURING THOSE YEARS. BUT, THE WORLD IS NOW MORE SOPHISTICATED AND PREPARED TO MARCH TOWARDS A WORLD GOVERNMENT. THE SUPRANATIONAL SOVEREIGNTY OF AN INTELLECTUAL ELITE AND WORLD BANKERS IS SURELY PREFERABLE TO THE NATIONAL AUTO-DETERMINATION [DEMOCRACY] PRACTICED IN PAST CENTURIES.”

—David Rockefeller in June 5, 1991 at the Bilderberger meeting in Baden Baden, Germany (a meeting also attended by then-Governor Bill Clinton.
If you’ve ever entertained the passing thought that mass media exists to create division and not unity, well, you’re on to something. If you’ve realized that nothing of any value is transmitted to you on television, then you are, in my never humble opinion, a very bright person. If you’ve gone even further and realized that mass media and the flow of misinformation is planned and contrived by global oligarchs,then pat yourself on the back: you are utterly brilliant.
You can pay your dues to David Rockefeller for this, and spit on his very grave when you get the chance. The man has invested far more billions into mass media than the number cited on Wikipedia as his total wealth. Of course he is an international banker with close ties to the worst family on planet Earth, the Rothschild family.
In fact, if you point your finger at anything foul in the USA, somewhere lurking in the unpublished darkness of a monopolized mass media bent on disinformation, there you will find David Rockefeller.
We can all rejoice that he’s gone.
This post was republished from soapboxie.com. You can find the original post here.