Mother Teresa was a moral monster, a sadistic religious fanatic guilty of medical malpractice.
This Sunday, Pope Francis will canonize Mother Teresa as a saint, one of the highest honors in the Roman Catholic Church. Tens of thousands of people are expected to fill St. Peter’s Square at the Vatican to honor a woman who supposedly lived her life dedicated to the poorest of the poor.
However, Mother Teresa was no saint, she was instead a moral monster, a sadistic religious fanatic who took pleasure in the suffering of others, and denied appropriate medical care to the sick and dying.
Yet the Catholic propaganda machine, eager for good publicity and the opportunity to hustle the gullible, continues to promote the soon to be saint while ignoring evidence of her moral incompetence.
Teresa was anything but a saint. The nun may have been generous with her prayers, but she was miserly with her foundation’s millions when it came to alleviating the suffering of the sick and the poor.
The celebrated nun had 517 missions in 100 countries at the time of her death. Yet despite plenty of funds, the majority of patients were not cared for properly, many being left to suffer and die without appropriate medical care or pain medication.
Indeed, conditions in the the Missionaries of Charity’s hospices were deplorable. In fact, Teresa refused to introduce the most basic methods of hygiene, even going so far as to reuse needles without sterilization.
According to one study, doctors observed a significant lack of hygiene, even unfit conditions and a shortage of actual care, food and painkillers. They say that the problem was not a lack of funds because the Order of the Missionaries of Charity successfully raised hundreds of millions of dollars.
Perhaps worse that the medical malpractice, was Teresa’s perverse and sadistic ability to take pleasure in the suffering of others. The fact is, Teresa believed that suffering – even when caused by poverty, medical problems, or starvation – was a gift from God.

I think it is very beautiful for the poor to accept their lot, to share it with the passion of Christ. I think the world is being much helped by the suffering of the poor people.” – Mother Teresa

Yet despite serious questions about Teresa’s character, motivation, and methods, the Vatican, enabled by a gullible and willing mainstream media, has engaged in a well orchestrated public relations campaign to manufacture a Catholic hero.
The late, great Christopher Hitchens was one of the first to raise questions about the authenticity of claims made by the Roman Catholic Church promoting Mother Teresa. The following is an excerpt from Hitchens’ excellent critique, The Missionary Position: Mother Teresa in Theory and Practice:

Mother Teresa was not a friend of the poor. She was a friend of poverty. She said that suffering was a gift from God. She spent her life opposing the only known cure for poverty, which is the empowerment of women and the emancipation of them from a livestock version of compulsory reproduction.…

Many more people are poor and sick because of the life of Mother Teresa: Even more will be poor and sick if her example is followed. She was a fanatic, a fundamentalist, and a fraud, and a church that officially protects those who violate the innocent has given us another clear sign of where it truly stands on moral and ethical questions.

Hitchens was correct to call out the “profane marriage between tawdry media hype and medieval superstition” that is the myth of Mother Teresa, a media superstar who was in the end a fanatic, a fundamentalist, and a fraud.
Since Hitchen’s ground breaking work on the myth of Mother Teresa, other researchers have confirmed Hitchens’ findings, including Dr. Aroup Chatterjee, a London-based physician, and author of “Mother Teresa: The Untold Story,” which gives extensive evidence that the Missionaries of Charity ran inadequate facilities and often offered little comfort to those it was trying to help.
Dr. Chatterjee said he found a “cult of suffering” in homes run by Mother Teresa’s organization, with children tied to beds and little to comfort dying patients but aspirin.
In addition, Dr. Chatterjee confirms Teresa allowed practices like the reuse of hypodermic needles and tolerating primitive facilities that required patients to defecate in front of one another.
Yet when it came to her own death, Teresa refused to be treated in one of her own unsanitary facilities that glorified and promoted the suffering and pain of others. Researchers said that when it came to her own treatment, “she received it in a modern American hospital.” Apparently for Teresa suffering was beautiful only if it was someone else doing the suffering.
However, despite the facts, despite the hypocrisy, despite the cruelty, and despite the sadism, Mother Teresa will be made a saint, demonstrating once again that the Roman Catholic Church is a morally bankrupt institution bereft of both intellectual and ethical authority.
Bottom line: Mother Teresa was no saint, instead she was a moral monster, and a sadistic religious fanatic.
For more see Hitchens’ expose – The Missionary Position: Mother Teresa in Theory and Practice, and watch the video below 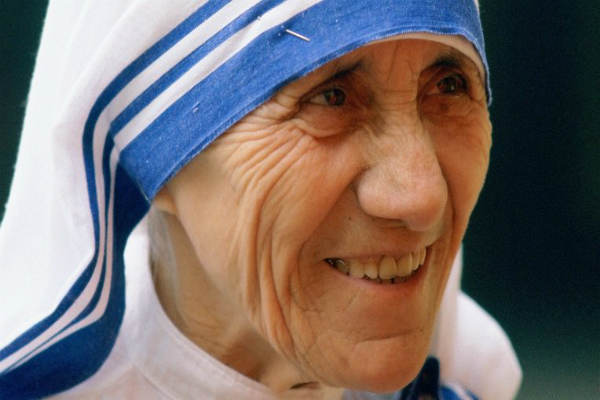