Bee Venom Can Literally Destroy HIV Without Harming Your Body

By: Christina Sarich via undergroundreporter.org

(UR) United States — What don’t bees do for us? They pollinate myriad forms of our food and 90 percent of wild plants. They make sure that millions of flowers continue to bloom, and their honey is considered an aphrodisiac. In addition to all this, a toxin found in bee venom destroys the human immunodeficiency virus (HIV) while leaving the human body unharmed. 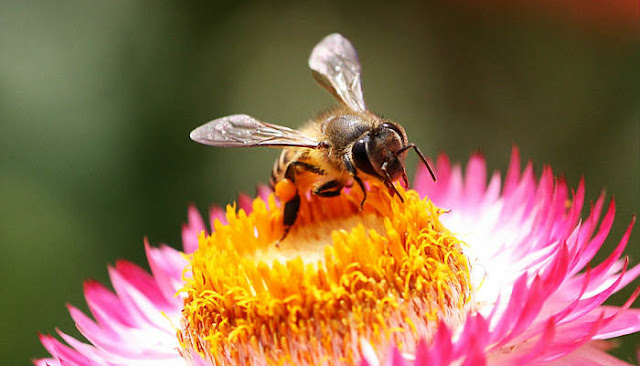 Scientists from Washington University School of Medicine in St. Louis, discovered that by poking holes in the protective layer surrounding HIV and other viruses, melittin — a toxin found in bee venom — could prevent the spread of HIV/AIDS by killing the virus, itself.

Though the pharmaceutical industry hopes to use nanoparticles containing melittin in a number of products to counteract HIV, it is possible that a more homeopathic remedy made from the very same bee venom could help prevent the spread of the disease.

Currently, scientists are using the nanoparticle version containing melittin to protect healthy cells from damage, since free-roaming bee venom in the body could cause considerable harm.

The paper’s senior author, Samuel A. Wickline, M.D., the J. Russell Hornsby Professor of Biomedical Sciences, has demonstrated that melittin-loaded nanoparticles are effective in killing tumorous cells, but the particles work because protective bumpers were added to the nanoparticles’ surface. When the nanoparticles come into contact with normal, healthy cells, they simply bounce off because the cells are so much larger in size.

Conversely, the HIV virus is smaller than the nanoparticle bumpers, and so when the melittin-infused particles touch an HIV cell, they become infused with them, thus destroying the disease-riddled cells.

The nanoparticle-melittin method of attacking HIV cells is a new approach to attacking AIDS, since medications currently sold for the same purpose simply stop the virus from replicating. These drugs do nothing to stop the initial infection.

Other viruses like Hepatitis B and C could also benefit from similar treatments with the bee venom toxin, since they attack diseased-cells similarly in a lab.

Clinical trials are still being conducted on the nanoparticle-melittin approach, with funding coming from the Bill and Melinda Gates Foundation (Explorations grant number OPP1024642 ‘Fusogenic nanoparticles for combined anti-HIV/contraception’), but bee venom has been used throughout the ages to heal multiple sclerosis, gout, shingles, tendonitis, high blood pressure, and hay fever. Hippocrates used bee venom to treat joint pain and arthritis, and ancient Egyptians used not just honey in their medicinal practices, but bee venom as well.

Apitherapy, or the use of honey bee products for medical purposes, including bee venom, raw honey, royal jelly, pollen, propolis, and beeswax, is a form of medicine which has been around for at least 3,000 years.

Honey-bee venom is a well-known pharmacologically active product of any bee hive, so though this news from Washington University School of Medicine is promising, it shouldn’t be relegated to Big Pharma’s over-priced, chemically-synthesized form of medicine. They may have a monopoly on prescription drugs, but the pharmaceutical industry, even with backing from the Gates’ family, doesn’t have a monopoly on Mother Nature.