You Won't Believe This Baby Got BLIND - Don't Let This Happen To Your Child! (PLEASE READ & SHARE FOR OUR CHILD)..

A three-month-old baby was left blind in one eye after a family friend took a close-up photograph but forgot to turn off the camera’s flash.

Baby boy suffered irreparable damage from the camera’s flash, which was held about 10 inches away from his face, doctors said. 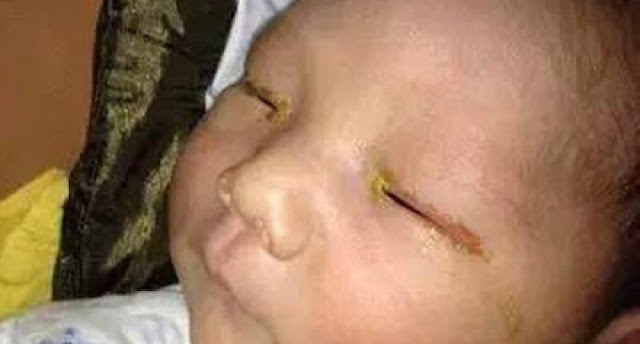 The baby’s parents noticed that there was something wrong with his vision soon after the picture was taken, The People’s Daily reports. (Scroll down for the video.)

01: A three-month-old baby boy (pictured) has been left blind after a family friend forgot to turn off the flash on a camera while taking a close-up photo.

After the incident, the baby suffered from blindness in his right eye and reduced vision in his left eye, according to the doctors who examined him.

The damage was diagnosed as permanent and doctors say that it cannot be fixed with surgery.

The strong flash damaged cells in the boy’s macula — the part of the eye in which incoming light rays are focused. Such damages can lead to the loss of central vision, which enables people to see directly ahead.

In humans, the macula is not fully developed until the age of four, which makes youngsters very sensitive to strong light.

02: The strong flash has damaged cells in the boy’s macula — the part of the eye where incoming light rays are focused. Pictured, an ophtalmogram of the retina. It shows the optic disc as a bright area on the right (nasal side) where blood vessels converge. The spot to the left (temporal side) of the center is the macula

While babies will reflexively shut their eyes when exposed to bright light, just milliseconds of exposure to strong light can be sufficient to cause permanent damage.

Experts are advising parents to be careful of strong lights in the bathroom when their babies are taking a bath.

It is unknown at present whether the family friend who took the photograph which caused the damage to the baby’s eyes will be facing any legal action.