OMG AGAIN! LOOK WHAT THEY FOUND IN MCDONALDS CHICKEN NUGGET..

Food scandals at McDonald’s don’t stop to shock the customers! Just recently a woman dining at one of their restaurants ordered some chicken nuggets, but after taking the first bite, she was dumbfounded to see that she got more than what she paid for!

The strange-smelling chicken McNugget was part of the Happy Meal that Nikki Sanders bought for her four-year-old daughter, Emily. As Emily wasn’t hungry, her mother decided to take a bite of the chicken McNugget herself. In the interview she gave for Tamworth Harold, she said “I just took a bite from the chicken McNugget and it tasted odd. I suddenly saw a pink stringy thing hanging down and spat the rest of the nugget out into the bag. I couldn’t believe it, I just felt sick.”

What looked like a worm, was hanging out from the odd-smelling McNugget. 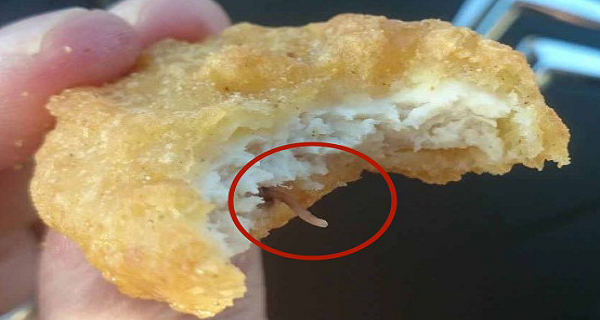 BPM MEDIA: Neil and Nikki Sanders who found a worm in a McDonald’s chicken nugget. Fast food fan Nikki Sanders had a not-so Happy Meal when she bought McDonald’s for her four-year-old daughter. The 30-year-old canteen worker said she discovered what looked like a WORM hanging out of the batter surrounding a Chicken McNugget. Little Emily had turned down the meal her mum bought her on Sunday from Tamworth’s Ventura Park, so Nikki took a bite instead. But she felt sick when she discovered the foreign body.

She also told the Mirror “I’m very fussy about what I eat and when I saw what was in the McNugget I went white. I’m just thankful Emily decided she didn’t want her Happy Meal. One good thing has come out of this though. It’s turned me off processed meat. I’m eating a lot healthier now.”

Even Sander’s husband, Neil gave his perspective of the incident. “It looks like a worm, but I can’t swear it’s one until tests have been carried out. Whatever it is, it shouldn’t be in there.”

The family was offered free food for the inconvenience they suffered, and a McDonald’s spokesperson made an apology and insisted that the dining experience and food safety of their customers was McDonald’s utmost priority.