Grow back RECEDING GUMS with these home remedies..

Receding gums, as the name itself suggests, occurs when the gum tissue around your teeth wear away and the gums seem to recede backwards making a larger area of the surface of tooth more visible. This makes it easy for bacteria to build up and survive there. If you do not contain receding gums, even the root of teeth may become exposed which can then cause pain making your teeth extremely sensitive. Not only this, due to the damage caused to the supporting tissue and bone structures of your teeth, you may eventually lose teeth. 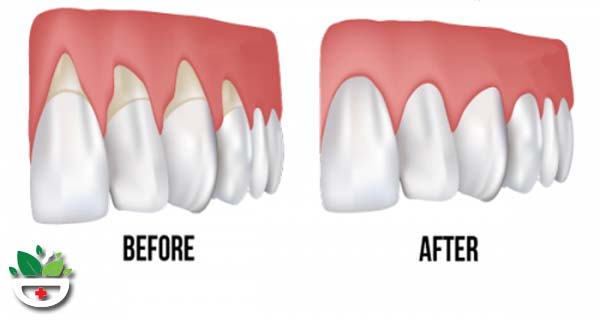 Although gum recession is very general dental problem, most of the people suffering from it doesn’t seem to notice it timely because the process is very slow and it occurs gradually. However, if your tooth has become sensitive, you should check for receding gums because this one of the very first signs of receding gums. Also when you feel your tooth or teeth appear to be larger than earlier, immediately start treating your tooth as this is nothing but a receding gum problem. You can list the symptoms of receding gums as follows:
Causes of Receding Gums
Piercing of your lips or tongue can also cause gum recession. This is because the jewelry that you wear after piercing may get rubbed against the gums. This may lead the gum tissue to wear away.

The health benefits of green tea are many. You can add treatment of receding gums to this too. As it is well known, green tea has loads of antioxidants that keep away many diseases by combating free radicals. Free radicals in your mouth can cause periodontal disease that may lead to receding gums. Green tea has catechins, an antioxidant that helps combat even the existing periodontal disease. These catechins in your green tea will strengthen the bond between your gums and teeth. The anti-inflammatory properties of green tea will reduce the swelling of gums that obstruct the proper healing of your gums and oral diseases.
Aloe Vera for Receding Gums

Another natural anti-inflammatory agent is the herb Aloe Vera. Aloe Vera is popular as a beneficial herbal remedy for most of the skin problems. This is due to its anti-inflammatory as well as cell repairing capabilities. When it comes to receding gums, Aloe Vera not only reduces the inflammation of gums but also activates the cells that are important for repair of tissues. Aloe Vera also has anti-bacterial properties that help keep the infections away from your mouth.
Alternatively, use Aloe Vera gel as a mouthwash. After you brush in the morning, add some water to the Aloe Vera gel and mix well to get a consistency that’s easy to swirl around in your mouth. Wash your mouth with this Aloe Vera mouthwash. Do this every time you brush during the day.