Shalin Shah was a recent college graduate and new Peace Corps volunteer when doctors discovered a rare form of cancer in his brain. Roughly half a year later, doctors came into his hospital room with the devastating news that he had just six to nine months left to live.

At the writing of this story, that prognosis is down to one week.

Throughout the physical and emotional ordeal, his loved ones say that Shah has demonstrated a profound resilience and peace of mind. The 22-year-old has tried to live every single day as fully as possible, including by marrying his high school sweetheart, Frances Chen. Now the two want to share his hard-won wisdom with the world. 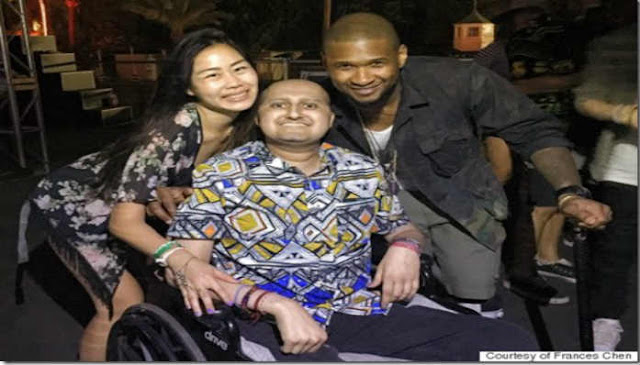 Born and raised in San Diego, Shah graduated from the University of Southern California in May 2014. He then shipped off to Peru to begin two years of service as an economic development volunteer with the Peace Corps.

“His dream was to help others who are in need,” Chen told The Huffington Post. She described her husband as “incredibly kind” and someone who “lives his life to the fullest and isn’t afraid to show his emotions.”

During his training in Peru, Shah developed a cough and was having difficulty breathing and severe rib pain, Chen said. Peace Corps doctors eventually found a six-inch mass in his chest cavity. In August, Shah was evacuated to the Ronald Reagan UCLA Medical Center, where he underwent 21 days of biopsies and emergency surgeries.

Following these tests, the doctors diagnosed him with stage IV synovial sarcoma — a rare cancer stemming from genetic mutation — with brain, lung and spinal cord metastasis. He was “in shock,” Chen said, and had lost over 50 pounds since the beginning of the summer.

“For his whole life he’s been so healthy, so active,” said Chen. “He never thought it was going to be cancer.”

By December, the cancer had spread to his lungs, bones and spinal cord.

On Feb. 5, 2015, an MRI scan revealed more than 30 inoperable brain tumors. He was given six to nine months to live.

“Instead of worrying if I was going to live or die, this terminal prognosis simplified the equation for me,” Shah wrote in a blog article on HuffPost.“Now I just had to focus on living out the rest of my life to the fullest and put all of my energy on having an awesome time enjoying the best of what life has to offer while leaving behind a positive footprint and legacy.”

Shah decided to get to work on his bucket list.

“Don’t ask what end the gods have given me or you, Leuconoe. How much better it is to endure whatever will be! Whether the gods have allotted you many more winters or this one is the final one, be wise, be truthful, strain the wine, and scale back your long hopes to a short period. While we speak, envious time will have already fled: seize the day, trusting as little in the next day!”

This quote, adapted from the ancient Roman poet Horace’s “carpe diem” poem, is how Shah opened an email to his family members in February, shortly after receiving the terminal prognosis. He described himself as a “deeply spiritual person” and shared a message of hope:

“I feel as if I was born for this end, this was my fate from birth, and there is a greater unknown purpose which was meant for my life which no one may ever figure out. Nonetheless, I am certain that there is a reason for my early exit and only the heavens know what that is.”

Life had already offered him so many extraordinary opportunities, Shah wrote. He had lived in Paris for a semester, found his true love and graduated from college.

“Billions of people around the world would give anything just to have lived a day in my shoes due to the freedom and resources I have been blessed with in my life,” Shah wrote. “In the end, there is very little difference in 22 or 90 years, the true beauty is being blessed with the gift of life at all.”

“Now, it’s time for us to celebrate as I seize the day! Together let’s show everyone how you really beat cancer, by living to the fullest up until the very end!”

Shah had always wanted to go to Coachella, Chen said, but when she checked in early February, tickets had been sold out. Chen sent an email to the music and art festival’s general inquiries address and was blown away by the response. Festival co-founder Bill Fold personally emailed them to offer the couple a free VIP pass. When Shah and Chen arrived, staff at Goldenvoice, an organization that does concert promotion for music festivals, surprised them with luxury yurt accommodations operated by CID Entertainment, spa vouchers, catering passes and artist wristbands that got them backstage at any show.

Most notably, Shah was able to meet his musical hero, Usher, as well as the Black Eyed Peas.

“We had the most incredible weekend of our lives,” Chen said. “The love and compassion of the entire Coachella team was felt everywhere we went.”

Shortly after returning from the festival, Shah and Chen were married in a sunset ceremony in Dana Point, California. They tied the knot on April 24, just a few months after their five-year anniversary.

“Of course, we capped off the night with an epic dance party to a playlist heavily featuring Shalin’s longtime musical idol, Usher,” Chen said.

One thing was still missing, though. Shah had remained in close contact with Peace Corps staff in Peru, sending them emails of encouragement and support from afar. At the time he left the program in August 2014, he had just one week of training to go before being sworn in as an official volunteer.

Peace Corps Director Carrie Hessler-Radelet was visiting Peru in April when she heard Shah’s story. Inspired by his bravery and dedication, she made a stop in Los Angeles to meet Shah and swear him in as an official Peace Corps volunteer.

“He’s maybe our best recruiter ever,” she half-joked to HuffPost. He wears his Peace Corps hat religiously, Hessler-Radelet said, and “continues to promote a message of perseverance and strength.”

“What’s really remarkable about Shalin is even though he wasn’t able to be in Peru,” she said, “he was continuing to serve.”

Last week, Shah went into the medical center for a routine round of chemotherapy. A day into the treatment, he began having extreme difficulty in breathing and one of his hands started to go numb, Chen told HuffPost. Doctors told them that given Shah’s high heart rate and breathing troubles, he had roughly a week left to live.

“All of our goals are just to make him comfortable,” his wife said.

Chen said she is keeping herself busy and focusing on her husband’s needs in order to get through this hard time. “I just want to stay strong for him,” she added.

Shah’s own optimistic attitude has helped his family find their strength, said his cousin Aditi Joshi.

“He’s completely shaped the way my family thinks about life and gratitude. He’s carried the entire family through, and it’s brought us all so much closer together.”

I’m going to carry this for the rest of my life,” Joshi added.

“[Shalin has] always loved sunsets. For him, sunsets really are about taking moments out of your day to appreciate the beauty in life.”

Shah leaves the world with a final statement, which appears unedited below:

No room for hatred in my heart

Stay positive, no time for negativity, no complaints or regrets

Life is perfect. I would not change one thing about Life or about myself or anyone or anything I know, everyone in the world is perfect in their own ways and serves a specific role in the universe

Do not judge people (you are no better than everyone else and they are no better than you, don’t mind yourself with what others choose to do, truly wish for the happiness of others, be self-confident and proud of the quirks and idiosyncrasies of who you are because you are part of an ecosystem that would not be the same without your existence (you play an essential role in the universe), only concern yourself with your own decisions and actions, be mindful of how much you need (don’t take more than what you need) know what you want out of life and only take the necessary resources to execute your life’s ambitions, minimize gluttony and waste, waste is an unavoidable part of life, I want everyone else to be as happy as they possibly can be (I want to help them reach their wildest ambitions, I want to volunteer and give to the less fortunate, I want to take my more fortuitous situation and spread it to others

Life is perfect, all of the quirks are what makes life beautiful, the essence of being a human being is beautiful, time is a flowing stream and measurements of time (I.e. Minutes, days) distract you from the fact that time is a constant stream, metaphysics and the workings of nature are beautiful and I have the upmost appreciation for everything

Keep an open mind: do not have pre-conceived notions, put in an effort to like things (songs, celebrities, people)

I have an infinite understanding, I understand everyone else’s decisions because they are fundamentally human like me and we are all driven by the same intrinsic human nature and I can never be mad at them for making any decision

Have fun, enjoy life all the time

Bad has to exist in order to appreciate good, relativity and perspective

Show appreciation and thanks to everyone for even very small acts

There is no need to try to impress others and make them jealous, do what you want to do, no matter what you do in life you cannot be arrogant

because everyone is human, no better or worse than you. At the same time, there is no reason you should feel jealous or insecure around others regardless of their lives, achievements, good looks, wealth, etc.

Enjoy everything you do, even those which you do not like doing

Giving to others is an act of spreading love

Do not do things for personal gain, do not take advantage of others, do not look for recognition or praise

Life is what you make of it, put in effort to excel. Make the most of what you have

Life is not a competition

No right/wrong way to live your life

There is no such thing as better, only better suited.