NEW ALABAMA BILL WOULD ALLOW KIDS TO HAVE HANDGUNS – CASKET SALES SHOULD SKYROCKET..

The Alabama House and Senate are both moving forward with bills that would circumvent federal law prohibiting the sale of firearms to minors by allowing parents or guardians to “transfer” the weapons to children under 18.

House bill 328 and Senats bill 262  would also eliminate record-keeping requirements from the Code of Alabama, removing language that mandates firearm dealers “keep a permanent record of the sale of every pistol, revolver, or maxim silencer, showing the date of sale, serial number, or other identification marks, manufacturer’s name, caliber and type, and also the name and address of the purchaser. 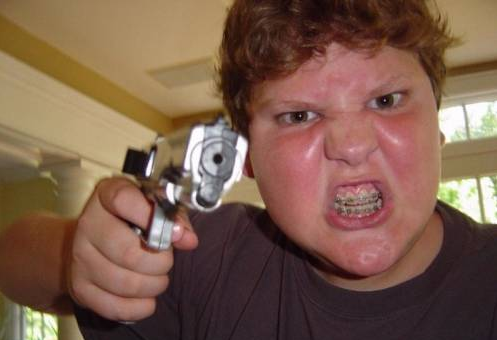 Congratulations, Alabama, not only will you be able to use a gun in a crime without it being traced back to you, you’ll also be able to get a volume discount on caskets as children will now have legal access to handguns.

What could possibly go wrong?

The good news is children will only be allowed to use those handguns under proper supervision.  Unless they’re using it for hunting, trapping, target shooting or training.  So basically the only time a child needs to be supervised with their pistol is if they’re robbing a bank.  Thank goodness for that.

State Senator Arthur Orr said the bill wouldn’t permit the sale of firearms to people under 18 as mandated by federal law, it would simply allow kids to hunt, trap and target shoot.  Orr said he started hunting with his parents when he was 12.

Even though children will be allowed to use handguns without supervision, Orr said the bill is meant to bring reason and common sense to Alabama’s gun laws.

Everyone knows children are the epitome of responsibility.  By allowing them not only access to but free rein to carry handguns, Alabama has shown the level of intelligence present in its lawmakers.


How anyone could think this will end well is a mystery.