By:  IMOGEN CALDERWOOD FOR MAILONLINE

A video of a lion that has allegedly been drugged so tourists can use it as a prop for 'holiday snaps' at an Indonesian safari park has provoked outrage.

Animal welfare campaigners have accused the park of exploiting the animal, which can be seen lying lethargically on a bench as tourists crowd around it for snapshots.

Footage shows zookeepers at the Taman Safari Park, in Bogor, West Java, waking the animal and dragging its lolling head round to face the cameras for holidaymakers paying the equivalent of £1 for the experience.

Scroll down for video 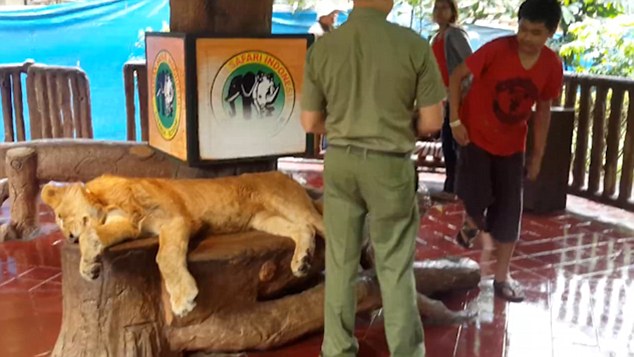 Drugged': Animal welfare campaigners have slammed the Indonesian Taman Safari Park for allegedly drugging a lion to be used as a prop for holidaymakers' photographs 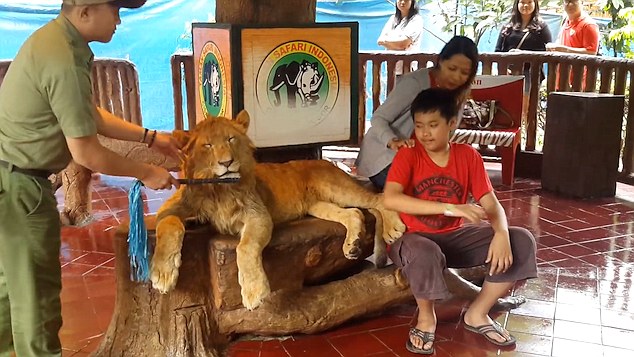 Control: Footage of the lion shows a zookeeper lifting up its head and dragging it round to face the cameras

‘Scorpion calls on Taman Safari to stop this and other exploitation of wild animals. Zoos are not supposed to entertain visitors,' said the organisation's senior investigator Marison Guciano.

‘They should be about conservation and education, I’m sure we all agree – don’t we?’

The Taman Safari Park, however, insists that the lion was merely sleeping 'after her lunch and vitamins', and that lions need a great deal of sleep in the wild.

Before the video came to light, the Taman Safari Park had a reputation for being a well-run animal conservation facility, and has won several national tourism and conservation awards.

It is also a full member of global governing body the World Association of Zoos and Aquariums (WAZA) - which offers animal care guidance and support to organisations around the world.

WAZA told MailOnline that they are investigating the allegations made against the Indonesian safari park, but could not reveal details. 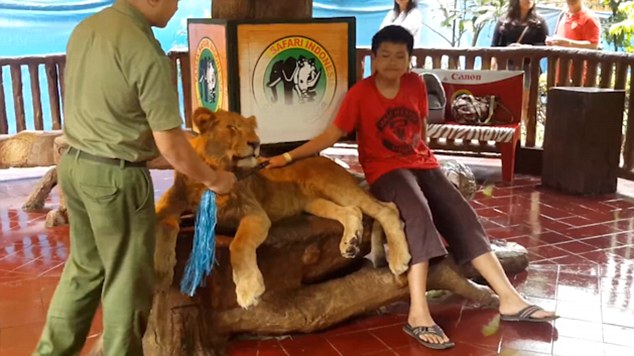 Posing: Visitors, who are paying just over £1 for the experience, are invited to sit next to the listless lion - which Taman Safari Park insists is only sleeping after its lunch 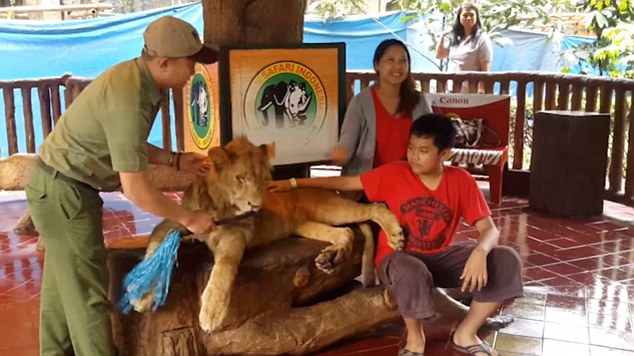 Welfare: The Taman Safari Park is a member of the global animal welfare association, World Association of Zoos and Aquariums (WAZA), which has confirmed that it is investigating the allegations

But leading lion scientist and head of the UK-based charity LionAid, Dr Pieter Kat, said: 'The trade of live animals... is supposedly well-controlled.

'After all, any live animal in trade cannot be destined anywhere but a WAZA registered organisation.

'That all sounds well and good, but who monitors these WAZA zoos? WAZA membership is determined by a payment of fees.

'There is no independent inspection of WAZA zoo members to determine compliance with ethics of animal care.'

However, on its website the association claims to have a strict code of ethics to protect the welfare of animals living in the member organisations.

Meanwhile, the Taman Safari Bogor park insisted that it would be 'unthinkable' to drug one of its animals.

‘With our reputation and standing among wildlife institutions, it seems unthinkable that we would sedate a lion for visitors’ interaction, and risk tarnishing our image,' the park told MailOnline.

‘The allegation that has been directed at Taman Safari Indonesia is a serious one, and completely baseless.
‘
We wish to state that TSI has never sedated an animal for interaction sessions with guests or to make them appear “tame” in their habitats in the park.' 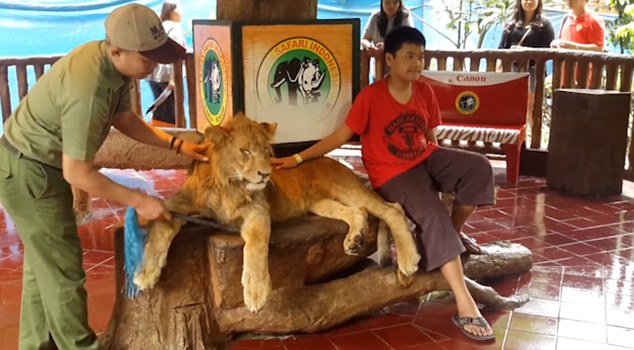 Uproar: The footage, which was uploaded to Facebook on April 2, has already been viewed more than 1.5million times - and has attracted a great deal of criticism 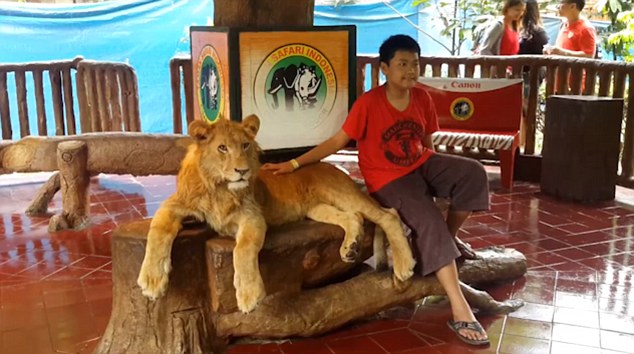 Attraction: The Taman Safari Park, in Bogor, West Java, is home to some 2,500 animals - and has won several national awards for national tourism and conservation

When asked whether a lion that is merely sleeping would pose a threat to visitors, the park replied: 'The lion used for the interaction is a cub that was born in March last year.

'It was handraised, as its mother could not nurse and care for it properly. A handraised cub this age is tractable by keepers it is familiar with, and there is minimal cause for concern.'

But Dr Kat added: 'In my opinion, this is a clearly drugged lion. You simply cannot manipulate a wild animal in this manner.'

Executive director of WAZA, Dr Gerald Dick, told MailOnline: 'WAZA has regional associations as members and they are responsible for their regional standards and their implementation.

'It provides strategic guidance on achieving positive animal welfare and conservation. We work with zoo professionals and welfare organisations to address matters of concern.

'This includes matters raised through complaints, complying with our internal complaint processes.

'Our code of ethics is a set of basic principles to help WAZA members conduct their actions in accordance with our community’s values.

'We are presently conducting an investigation into the matter, and once we receive more information we will release a full statement on the matter.'

Scorpion has sought assurance from the Indonesian Natural Resources Conservation Agency (BKSDA) that the lion wasn't drugged, but the agency is yet to respond.

The safari park is home to some 2,500 animals from around the world - including Bengal tigers, giraffes, lions and elephants.

It also offers visitors the chance to interact directly with some of the animals, including feeding and petting them; bus safaris around the park; canoeing; circus performances and traditional arts.