Doctor Sells His Practice, Opens Up “Farmacy” Using Food As Medicine Instead

The brilliant Dr. Robert Weiss did something completely unheard of in the medical community.  He sold his medical practice and decided to teach the importance of diet and nutrition in health by opening a “Farmacy”. 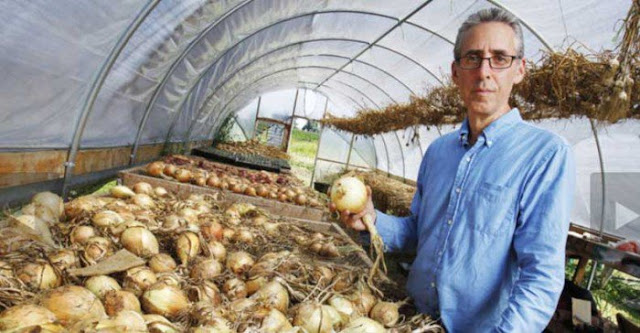 Dr. Weiss believes that we all need to change our focus for medicine and health and reconnect with the basic knowledge that has been shunned and suppressed by big pharma.

After selling his New York medical practice, Dr. Robert Weiss built the very first farm-based medical practice on his 348-acre farm.  Located in Long Valley, New Jersey the ‘farmacy’ is focused on treating patients with plant foods as the medicine.

“Plant-based whole foods are the most powerful disease-modifying tools available to practitioners — more powerful than any drugs or surgeries,” said Dr. Weiss.

Billions of people have been drugged with synthetic chemicals.

In order to treat diseases big pharma has pushed the sale and consumption of synthetic chemicals.  All while the research and awareness for the benefits of plants and herbs have taken a major back seat in society.  Even though plants have been used quite successfully since ancient times many people go straight to pharmaceutical drugs whenever they are sick.

Even our diets have become ridden with processed and highly preserved food like ingredients that perpetuate disease and illness in our bodies.  Truly Dr. Weiss is following the advice from the father of modern medicine who said:

“Let food be thy medicine and medicine be thy food.” ― Hippocrates

The priority for the new Farmacy approach is to bring the body back into balance through eating vegetables, grains, fruit, nuts, seeds and beans.

“I am not saying if you fall down and break your ankle, I can fix it by putting a salve of mugwort on it. You need someone to fix your fracture,” Dr. Weiss said. “I am talking about treating and preventing chronic disease — the heart attacks, the strokes, the cardiovascular disease, the cancers … the illnesses that are taking our economy and our nation down.”

The natural parts of plants contain nutrients that allow your body to heal.  For example many foods such as turmeric act as an anti-inflammatory.  Inflammation or swelling is believed to be the cause of many different chronic diseases.

During the interview for the new Farmacy Dr. Weiss spoke about the lunch that was prepared on location,

“a salad of baby kale, radicchio, purple carrots, cucumbers, onions and cherry husk tomatoes tossed with a walnut vinaigrette, followed by eggplant rollatini with tofu instead of cheese, and dairy-free chocolate pudding garnished with raspberries”

Even something simple like this salad contains many important medicinal ingredients.

Society needs to get its drug dependence under control.

The main goal is to reduce societies over-dependence on dangerous pharmaceuticals.   This will help remove the negative side effects including addiction, overdose, and even death.  Another one of his goals is to avoid unnecessary surgeries through bringing balance back to the body.

In the case of 90-year-old Angelina Rotella from West New York, Dr. Weiss mentions her incredible success story.  The night before Christmas Eve Angelina Rotella came into his office with congestive heart failure and in a wheelchair.

“I asked her, ‘Do you want me to call 911 and admit you to Palisades General? Or will you let me feed you sweet potatoes and kale?’ Amazingly enough, with the help of her daughter, she chose this,” Dr. Weiss said. “She doesn’t have diabetes anymore and chronic heart failure. She is cooking, sewing and walking around town. I’m not saying it’s easy, but she seized the opportunity and she is transformed.”

Her prescription was a strict diet which included “grains (such as whole-grain brown rice and sweet potatoes), steamed greens (including kale and spinach), fruit (a big serving of wild organic blueberries is a must) and water.” Her daughter, Angie Rotella-Suarez, calls it “more than a miracle,” because her mother was able to stop taking her blood pressure heart medications 2 weeks later.

News of the great success spread and daughters Rotella-Suarez and her sister decided to try the same diet where they became no longer pre-diabetic and lost around 40 pounds.

90 families have joined the farmacy.

90 families have joined the local farmacy and in addition to paying a membership fee they volunteer their time harvesting vegetables and picking weeds.   Not only is this great exercise but it helps people get more interested in eating healthy by becoming involved in the food production process.

“Human health is directly related to the health of the environment, the production of food and how it is grown,” said Dr. Weiss, who also got his undergraduate degree in botany from Rutgers College of Arts in Science. “I see this farm as an opportunity for me to take everything I’ve done all my life, all the biology and chemistry of plants I have studied, and link them to the human biological system.”

In addition to spreading awareness about health and nutrition, a recent study showed that when you work in the earth such as with gardening you make contact with bacteria in the soil that will release serotonin in your brain that helps you become smarter and feel happier.

Do you feel that we should do this all over the world?  Let us know your thoughts in the comments below.