The point of this confiscation can not possibly be clearer: Monsanto wants no honeybees resistant to their Roundup product to continue to exist.

The Illinois Ag Dept.  illegally seized privately owned bees from renowned naturalist, Terrence Ingram, without providing him with a search warrant and before the court hearing on the matter, reports Prairie Advocate News.

Behind the obvious violations of his Constitutional rights is Monsanto. Ingram was researching Roundup’s effects on bees, which he’s raised for 58 years.  “They ruined 15 years of my research,” he told Prairie Advocate, by stealing most of his stock.
A certified letter from the Ag Dept.’s Apiary Inspection Supervisor, Steven D. Chard, stated:

“During a routine inspection of your honeybee colonies by … Inspectors Susan Kivikko and Eleanor Balson on October 23, 2011, the bacterial disease ‘American Foulbrood’ was detected in a number of colonies located behind your house…. Presence of the disease in some of your colonies was confirmed via test results from the USDA Bee Research Laboratory in Beltsville, Maryland that analyzed samples collected from your apiary….”

Ingram can prove his bees did not have foulbrood, and planned to do so at a hearing set in April, but the state seized his bees at the end of March. They have not returned them and no one at the Ag Dept. seems to know where his bees are.

The bees could have been destroyed, or they could have been turned over to Monsanto to ascertain why some of his bees are resistant to Roundup. Without the bees as evidence, Ingram simply cannot defend against the phony charges of foulbrood.
Worse, all his queens died after Kivikko and Balson “inspected” his property, outside of his presence and without a warrant.

Of note, Illinois beekeepers are going underground after Ingram’s experience and refuse to register their hives, in case the state tries to steal their private property on phony claims. 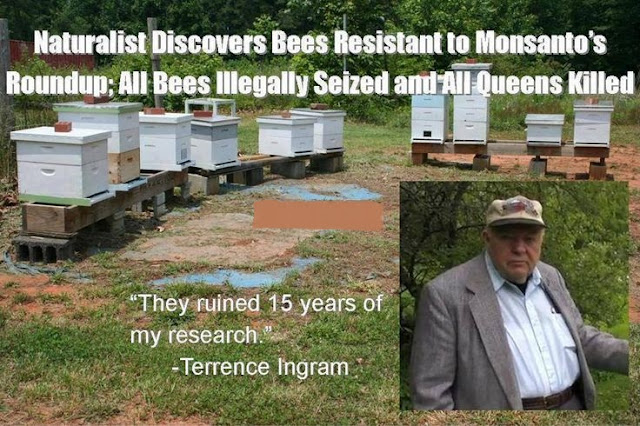