Have You Ever Woken Up In The Middle of Night Paralyzed? You’re Not Alone..

How many of you have at one time or another woken up unable to speak or move? If you have, you are not alone.

The classic definition for this phenomenon is called sleep paralysis. It may last a few seconds, several moments, or occasionally longer and usually occurs right before you are about to fall asleep or wake up. Many people report feeling a “presence” that is often described as malevolent, threatening or, evil, and usually experience a tremendous amount of terror.

The presence is usually seen, felt and even heard. People also report unique experiences like the sensation of floating or being outside the body. They believe the phenomenon to be an extremely spiritual one.

In the modern medical world, these experiences are defined as hypnagogic and hypnopompic hallucinations (0), which is often the explanation when conventional modern views of spiritual experience is combined with medical ideas that label direct spiritual experiences as psycho-pathological. It is well understood that sleep paralysis coincides with  physiological mechanisms in the brain. What is not well understood are the strange experiences individuals have when experiencing sleep paralysis.  The discussion of spiritual experience as an explanation for a bizarre and complex phenomenon that little is known about has been suppressed thus discouraging discussion of it in modern society.(1) 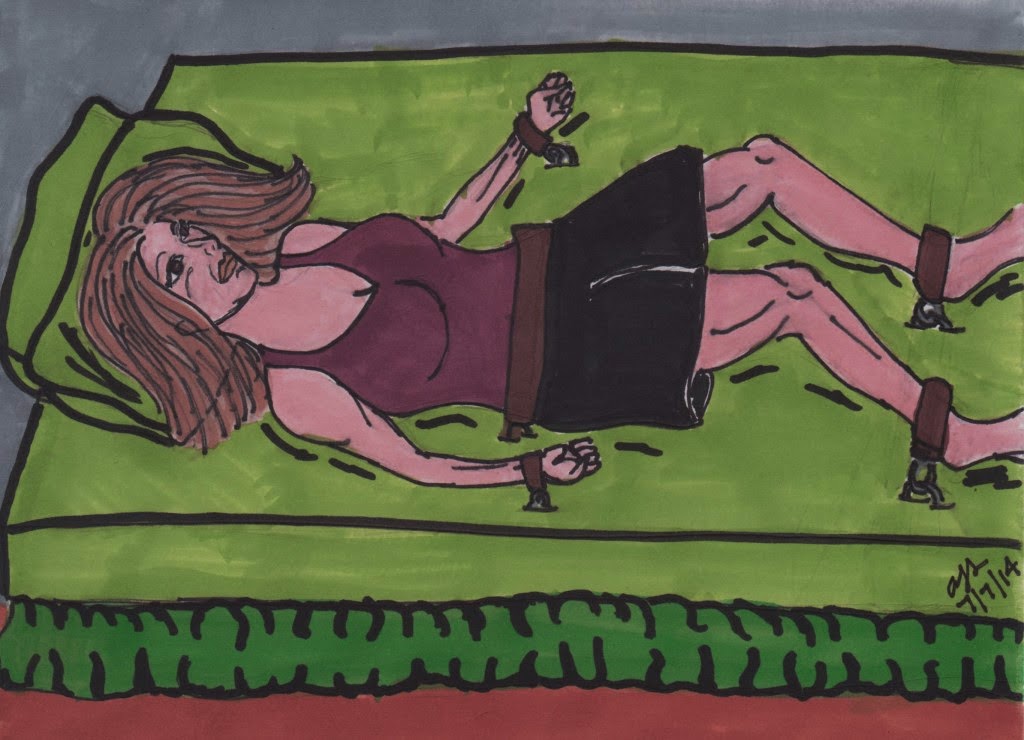 "Beginning in college and graduate school I was particularly interested in the beliefs of ordinary people, especially the ones that were treated as nonsense in the academic world. The academic world treats spiritual belief in general that way. I was interested in alternative medicine at the same time for the same reason. Right from the beginning I was convinced that ordinary people are smarter, are more sensible than they’re given credit for by scholars, and that traditions that are wide spread and deeply held probably have more rational basis, and more observation built into them than the theories that I was taught in graduate school. I couldn’t believe that all the beliefs of ordinary people that are not part of the academic worldview were nonsense. I have the impression that the academic world might be a little to narrow, and that regular people might have something to offer about it (sleep paralysis) through their experience and what they believed about things. There are beliefs that are based on experience that have been dismissed as superstitious beliefs that bear much more investigation, these are experiences that are built into the spiritual traditions all over the world. In the modern western world, for at least the past one hundred years these phenomena have been explained on the basis of psychopathology. So the discovery that those experiences are common and that they occur among ‘normal’ people, that they are not in fact indicative of any type of disease has tremendous importance for medicine. This isn’t a new phenomenon, we erased the knowledge of these experiences from the cultural repertoire – Dr David J Hufford, Ph.D, Professor Emeritus, Penn State Medical School" (1)

Right from the get go, almost all scientific approaches to the phenomenon of sleep paralysis assume that the experiences that stem from it are hallucinations. Rather than coming from the standpoint of complete neutrality, most studies completely shut out the idea of any reality behind ‘hallucinations.’ Just because there are measured biological and chemical activities during the sleep paralysis phenomenon does not mean there is a causal relationship between the two. There are other things we must take into consideration and as quantum science is showing us, there are definitely worlds within our world that we are not able to perceive easily yet. There is definitely a non-physical aspect to science in general that we are just beginning to wake up to.

"The day science begins to study non-physical phenomenon, it will make more progress than it made in all the previous centuries of its existence" – Nikola Tesla..

Modern scholars have found spirit and spirituality hard to define, and as mentioned earlier usually places these topics within the circle of ridicule amongst the scientific community. Many reading this probably have a good idea of the terms that fit under the umbrella of “spirit” or “spiritual.” They involve out of body experiences, visits from entities not of this world, near death experiences, frequency, vibration and more.

It’s important to realize that many experiences people have within the “spiritual” realm occur when one is fully conscious, awake and alert and not during what sleep researchers call sleep paralysis. It’s quite possible that our level of scientific understanding is not advanced enough to explain certain phenomenon, so sometimes they are grouped into the category of hallucinations when they are really phenomenon we do not understand and cannot yet explain in a scientific manner.

At the same time, some of the phenomenon described that arise from sleep paralysis could very well be hallucinations, although I don’t believe this to be the case. I am very open to the idea that what is experienced for some during ‘sleep paralysis’ is indeed intertwined with the true nature of reality we clearly do not yet fully understand. The point is we don’t yet know for sure, and for the scientific community to assume and label them as definite hallucinations and as a figment of the imagination is limiting.

Scientific evidence for out of body phenomenon isn’t prevalent, but it’s hard when most scientific phenomenon is suppressed. I’m referring to developments within the world that are classified for the sake of national security. Recent leaks from the NSA were responsible for the very first public disclosure of a black budget, and the Canadian government was recently outed for the muzzling of scientists(2). This coincides with the remote viewing experiments that involved the intelligence community and Stanford University, among others. (3)(4)(5)

It’s interesting that there is also science and official research behind these types of phenomenon that give further credibility to it. It is even more interesting that it is within the hands of the intelligence community, extremely classified and washed away in secrecy, just like the experiments conducted at Stanford University. Among the varied hallucinations associated with sleep paralysis, out of body experiences and vestibular motor sensations represent a distinct factor.(6) Remote viewing is the ability of individuals to describe a remote geographical location up to several hundred thousand kilometers away, this phenomenon has been proven time and time again, and shortly after its publication the program was instantly shut down by the department of defense.

We have many examples of phenomenon that would fit under the “spiritual” umbrella, and who are we to say that the experiences that occur within sleep paralysis are not indeed real phenomenon. Sometimes, ideas and concepts can be a threat to power, to control and to the overall perception humanity has of reality as a collective. If you change the way you look at things, the things you look at change. If the planet changed the way it looked at this phenomenon, surely it would contribute in one of the biggest paradigm shifts the planet has ever seen, and this is exactly what is continuing to unfold on planet Earth today.

"The ridicule of these phenomenon is a level of social control. Scholars, academics and elite intellectuals in general constantly describe these things as if not indicative of insanity, them being primitive, and being the product of a lack of education. These concepts in the realm of anthropology and history are taken to be are product of imagination" – Dr David J Hufford (1)

My Experience With Sleep Paralysis..

When I was a child, I remember having a number of lucid dreams. They seemed so real and I felt one hundred percent conscious during the experience. I was able to do whatever I desired whilst dreaming. My first experience with sleep paralysis didn’t occur until I was a little bit older. The very first time it happened I remember suddenly waking up from a loud bang,  a bright flash of  light (although my eyes were closed) and a loud sound in my ears. I had the ability to open my eyes, but I couldn’t move my body. It’s almost as if my brain was awake but my body was still sleeping. I was terrified, and the reason I didn’t open my eyes is because I felt the presence of two beings on my left side, and two beings on my right side and I didn’t want to see. Whether they were there or not, I don’t know, whether I was dreaming or not, I don’t know.

Another time, again I woke up in the middle of the night. I could open my eyes and I was totally aware of my surroundings. I was on the road in a motel room by myself, I could see the TV, I could see the lamp in the corner of the room as well as the chair. I could not turn my head but I could look around. Although my eyes felt heavy, I could indeed open them. I couldn’t move and was pretty scared, I remember thinking “not again, why is this happening to me.” I saw a dark shadowy figure come through the window, it seemed about 5 feet tall, I was on the left side of the bed and the window was in the right corner of the room. It came across the room, across the foot of my bed to the left side of my head. It put its mouth up to my ear and started to whisper rapidly. I could not understand what it was saying, but it was whispering extremely fast.

I had a few other experiences after that, and after I woke up from these experiences which were pretty scary, I started to desire more because I realized that although I couldn’t move, my consciousness was still there. I was still awake, alert and able to perceive the environment around me. The next time it happened, I assured myself that I would not react in fear, and that I would instead embrace the experience and try to “play” with it, explore and use this state of consciousness for further discovery about a potential world we are not able to experience, but are. The next time it happened, I reminded myself to stay calm, enjoy it and see what happens, this time I actually wanted to communicate with whatever I perceived to be there, or was there. When I did this, nothing presented itself. I still couldn’t move, but didn’t try to jolt myself out of it. I tried to float out of my body and was successful. I fully floated out of my body, but could only go so far, about one meter. I tried to go further but it was as if I was still attached to my body. This was a very cool experience, unfortunately after I decided to not react in fear, and play around the with experience, the experience stopped, and I never had it again.

These type of phenomenon are definitely intriguing, and nobody, including researchers within the scientific world should dismiss the experience one has while experiencing sleep paralysis as completely false. The scientific community should be comfortable in a place of neutrality, instead of characterizing a phenomenon as false without any evidence to suggest that be the case. They don’t have to ridicule it.  I hope I’ve provided enough information within the article, as well as adequate sources for you to further your research if interested.