Father posts Facebook message explaining why he just murdered his beloved daughter, wife and his sister..

A father has seemingly admitted killing his daughter, wife and sister by explaining why he shot them on Facebook.
Randy Janzen said he killed 19-year-old daughter Emily because she suffered from excruciating migranes, which he said had ruined her life and made her depressed. 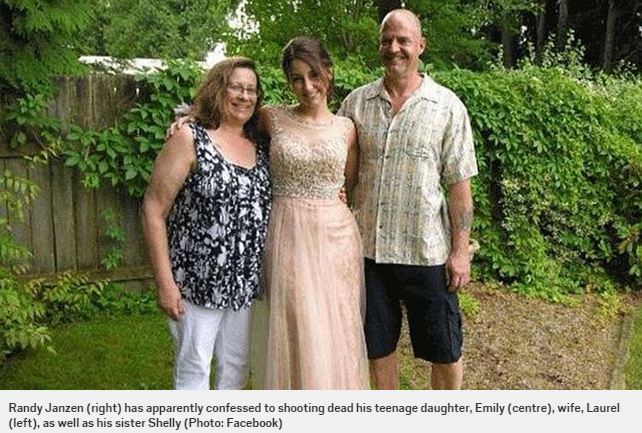 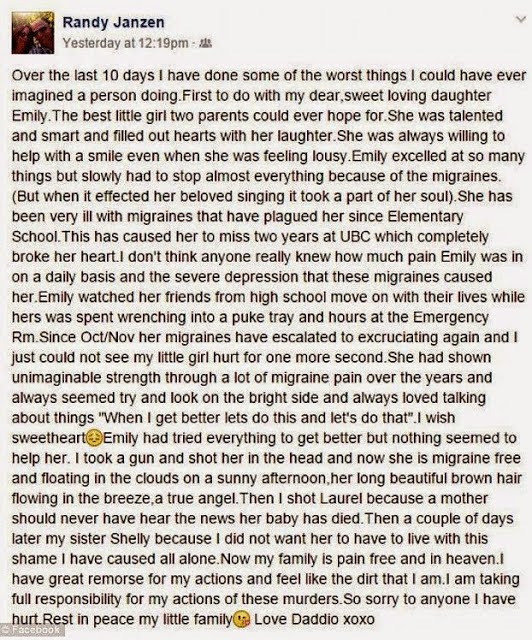 Janzen then said he killed his wife because ‘a mother should never have to hear the news her baby has died’, and his sister so she could avoid the shame of his actions.

He died in a fire at a home surrounded by police, who were called after a caller spotted the post.

His death is believed to have been a suicide.

Police in Vancouver, Canada, say they are aware of a post made by Randy Janzen, in which he said: ‘I have done some of the worst things I could have ever imagined a person doing.’

His harrowing post, written on Thursday, said: ‘I have done some of the worst things I could have ever imagined a person doing. First, to do with my dear, sweet, loving daughter Emily.

‘The best little girl two parents could ever hope for… Emily excelled at so many things but slowly had to stop almost everything because of the migraines.

‘I don’t think anyone really knew how much pain Emily was in on a daily basis and the severe depression that these migraines caused her.

‘Emily had tried everything to get better but nothing seemed to help her. I took a gun and shot her in the head and now she is migraine free and floating in the clouds on a sunny afternoon.’

He added: “Then I shot Laurel because a mother should never have [to] hear the news her baby has died.

‘Then a couple of days later my sister Shelly because I did not want her to have to live with this shame I have caused all alone.

‘Now my family is pain free and in heaven.’